Frazer Merrick explores the joy and wonder of Walton Pier located in North Essex, from the crashing sounds of the penny dispensers to the distinct sounds of modern arcade machines.

Frazer Merrick explores the joy and wonder of Walton Pier located in North Essex with his audio art titled 'Hidden Sounds of Coastal Arcades'. From the crashing sounds of the penny dispensers to the distinct sounds of modern arcade machines. These sounds of childhood nostalgia are perfectly narrated by stories from residents young and old whilst the hustle and bustle of life carries on in slow motion behind.

This immersive audio experience kicks off with the sound of waves cascading onto the seafront as children laughing innocently washes behind building up to the narration of a woman describing how the pier encourages people to be in a natural state of pure and genuine happiness, the piece falls into the deep sounds of the penny dispenser pouring money out into the metal tray below as the trance like voice of a young girl exclaimed that she feels “like a little kid” encapsulating the guiltlessness of childhood whilst pulling the listener into their world and guiding them through memory lane.

The words of a young boy talking about a fairground ride is then pushed into a vigorous wave of electric sounds caused by the arcade machines that add both intensity and curiosity recreating the experience of stepping onto the pier for the first time as a child and perhaps even acting as a metaphor for the stresses and pressure of life as we grow older as it glides into an older gentleman recalling a story of how he used to work on the ghost train as a 16-year-old teenager.

Something Frazer has managed to achieve so effortlessly is how tactile the sounds are despite the listener not being able to touch the objects themselves, you can feel yourself touching buttons on the arcade machines, the sea air brushing upon your skin and you experience the dizziness of the waltzers due to the powerful sounds or even the universal familiarity of stories told by locals. ‘Hidden Stories of Coastal Arcades’ puts the lives of passionate locals at the forefront of this intense audio art showcasing the beauty of coastal towns and the history they hold, whether you grew up in a seaside town or have fond memories of childhood holidays allow the sounds and stories of Walton pier to bring the memories flooding back. 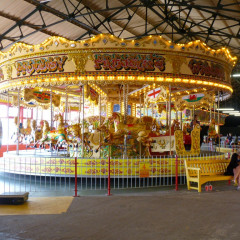 Frazer Merrick explores the joy and wonder of Walton Pier located in North Essex, from the crashing sounds of the penny dispensers to the distinct sounds of modern arcade machines.