The results of the report are a wake up call to reinvigorate preventative efforts and commit to collective climate action.

Unprecedented changes are occurring in the Earth’s climate according to the latest report from the Intergovernmental Panel on Climate Change (IPCC). Published 9 August, the report states that changes are occurring across the entirety of the planet and its climate system, and some of them – including rising sea levels – will be irreversible within our lifetimes, and for many generations afterwards.

The report predicts that we may hit 1.5°C global warming levels in the next 20 years. At 1.5°C we can expect to see an increase in heat waves, with cold seasons becoming shorter and warm seasons longer. By 2°C, heat levels will be near intolerable for both agriculture and health. Other effects of climate change set to worsen include heavy rainfall and subsequent flooding, droughts, rising sea levels, coastal erosion, permafrost thawing, the melting of glaciers, and acidification and other changes to ocean ecosystems.

The report also highlights the importance of human actions in tackling climate change and states that if we wish to curtail this rise in temperature, greenhouse gas emissions must be reduced quickly, efficiently, and on a global scale. To support the ability to take these actions, the IPCC has also included a more detailed risk assessment than previous reports, with information that is more regionally focused.

However, when just 100 companies are responsible for 70% of the world’s greenhouse gas emissions, and the wealthiest 1% of our population are responsible for over two times more carbon dioxide emissions than the poorest 50%, the opportunity to implement preventative action is effectively out of the hands of much of the population.

So how can the majority of us take action then? Recycling, reducing your meat consumption, and using public transport can all seem futile in the face of worsening climate change and the knowledge of who is responsible. However, there are some steps we can take. Anna North in her article ‘How to fight climate despair’ for Vox stated that it is essential to “think beyond the individual and seek community support and solutions — especially those that put pressure on governments and companies to make the large-scale changes that are necessary to truly curtail emissions”. North also quoted Mary Annaïse Heglar who argues that “the most detrimental thing to climate action is this feeling that we’re all in it alone.”

A more sustainable future starts with more inclusive and more unified communities and community-focused action. The opportunities to tackle climate change may fall in their largest share to a small percentage of the population, but through collective action the remaining majority have a better chance of influencing that demographic’s decisions.

An interactive map of climate action groups across England, Wales, and Northern Ireland can be found at https://takeclimateaction.uk/join.

Dulcie Geist is a Fine Art graduate from Cardiff, now residing in Glasgow. They love Welsh culture, queer culture, pop culture, and lack of culture. They have a passion for the arts and an even deeper passion for anything that makes the arts more accessible (and frankly, more fun). 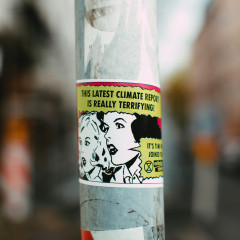 IPCC’s latest climate report: What it means for Earth and for us

The results of the report are a wake up call to reinvigorate preventative efforts and commit to collective climate action. 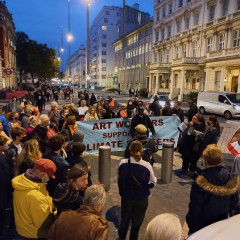