This year’s Oscars ceremony provided a balance of the predictable and the unexpected as historic and diverse wins were made.

Predicted to be the star of the show, Nomadland took home Best Picture, Best Actress for its lead Frances McDormand – who has now won the award three times – and Best Director for Chloe Zhao. She is the first woman of colour to win an Oscar for directing, and the second female director to win in the award’s 92-year history, following Kathryn Bigelow in 2010 for The Hurt Locker.

Best Actor went to industry veteran Anthony Hopkins for his role in The Father as an elderly man struggling with dementia. Absent from the ceremony, Hopkins posted a video message to his Instagram, saying "At 83 years of age I did not expect to get this award, I really didn't”. Many had hoped the late Chadwick Boseman would posthumously win for his role in Ma Rainey’s Black Bottom. Hopkins paid tribute to his fellow nominee, saying Boseman had been “taken from us far too early”.

The awards for Best Supporting Actor and Best Supporting Actress introduced relatively new faces to the Hollywood ceremony. London-born Daniel Kaluuya won for his role as the Black Panthers leader in Judas and the Black Messiah and said he’s “humbled to be nominated for portraying a man whose principles I deeply respect”. From the film Minari which follows a Korean-American family, famous South-Korean actress Youn Yuh-Jung  won Best Supporting Actress. Adding some amusement to the ceremony, she flirted with presenter Brad Pitt before quipping about mispronunciations of her name, saying “Tonight, you are all forgiven”.

Perhaps in an attempt to shake things up beyond the already unusual ceremony that had split audiences and acceptance stages between LA and London, the standard order of awards was altered. Typically, the Oscars culminates in giving out the award for Best Picture, which is the most significant prize of the night, and arguably the entire Hollywood film industry. However, this year Best Picture came before the awards for Best Actress and Best Actor, a directorial decision which some critics have slated.

After a difficult year for the film industry, the Oscars marks the end of award season and has struck a hopeful chord for the cinematic year ahead.

Header Image Credit: "Academy Award Winner" by Dave_B_ is licensed under CC BY 2.0 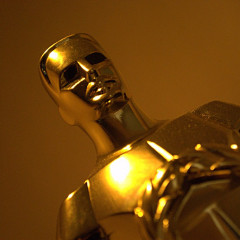 This year’s Oscars ceremony provided a balance of the predictable and the unexpected as historic and diverse wins were made.