The Royal Shakespeare Company in Stratford-upon-Avon has announced designs for a temporary outdoor space and an experimental online rehearsal room.

This summer the banks of the River Avon will play host to the RSC’s new open air garden theatre in their push to reignite the theatre scene. It will seat up to 500 people who will be able to watch the theatre’s production of Shakespeare’s The Comedy of Errors, which was in rehearsal in March 2020 before the national lockdown hit. Once the run has finished in September the space will be able to be packed up and stored for future use.

The RSC’s artistic director Gregory Doran said that the outdoor theatre will “be a joy and a symbol of regeneration and coming out of this pandemic. It is the power of being able to come back and congregate and feel safe and say yes, OK, let’s go back inside now.”

These 21st century plans for an outdoor theatre are not unlike the Globe Theatre, which opened in the 1600s and hosted original performances of Shakespeare’s plays. It has since been rebuilt in 2014.

Alongside the garden theatre, the RSC are also opening up livestream rehearsals of Henry VI Part One in June for Shakespeare-lovers to watch online. The public will be able to observe warm-up sessions and gain insight into rehearsal processes and how Covid-19 protocols have changed these. In the evenings there will be Q&A discussions with members of the RSC. There will be a full live rehearsal run-through of Henry VI Part One on June 23.

You can find tickets to these RSC performances and other programmes here. 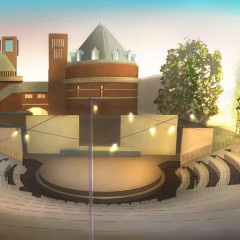 The Royal Shakespeare Company in Stratford-upon-Avon has announced designs for a temporary outdoor space and an experimental online rehearsal room.