The Oscars have happened. The biggest night in the world's entertainment awards season is over.

Let's look back at what was the culmination of the most controversial awards season in living memory.

This year, the Oscars were lambasted for producing a list of very straight, white nominees and nominations. Straight Outta Compton was sorely missed out as was Carol and individual performances by Idris Elba and Will Smith. Naturally, therefore, the list of winners was quite non-diverse. The amount of non-white faces accepting gongs this year was low, highlights went to Alejandro Gonzalez Iñárritu picking up Best Director for The Revenant, British-Asian director, Asif Kapadia shocked by winning the Best Documentary award for the excellent Amy over legendary doco director, Joshua Oppenheimer, and Emmanuel 'El Chivo' Lubezki won his third Oscar for Best Cinematography for the third consecutive year in a row for The Revenant. He is the first cameraperson to do so and the first winner to do so since three consecutive wins for the Visual Effects team behind the Lord of the Rings franchise.

Of course, host and legendary Black comedian, Chris Rock, gave an achingly uncomfortable yet brilliant stab at presenting the show, constantly addressing the issue of diversity of which he has certainly been in the middle.

Outside of colour, surprises came in the form of Spotlight winning Best Picture, Alicia Vikander winning Best Supporting Actress for The Danish Girl over Kate Winslet, and the other Alicia Vikander film, Ex Machina, winning Best Visual Effects over Star Wars. Sam Smith won the Oscar for Best Original Song for Spectre's Writing's on the Wall over Lady Gaga's Til It Happens To You. And finally, Mark Rylance took Best Supporting Actor for Bridge of Spies over Sylvester Stallone. I kind of called Spotlight's, and Rylance's surprise wins but other people weren't so convinced.

What's noticeable is that the surprises worked in Britain's favour – Kapadia, Rylance, Smith, Ex Machina, and The Danish Girl are all British and weren't expected to win their awards. Elsewhere, Stutterer, a British short won Best Live Action Short Film. Jenny Beavan's Costume Design win for Mad Max: Fury Road was surrounded by remarkably less controversy than her equivalent win at the BAFTAs. Speaking of which, Mad Max was the real winner of the night winning the most awards: six, all being craft awards.

I've gotten this far without mentioning that Leonardo DiCaprio has won his first Oscar after five previous nominations since 1994: he won Best Leading Actor for The Revenant. Phew.

Other than the wins themselves, speeches and performances were important this year.

Lady Gaga's performance of her nominated song overshadowed the performance of the winning song by Sam Smith with a moving stick-shaking at domestic violence.

Smith's win itself was dedicated to the world's LGBT community.

Now without further ado, here's the list of winners.

Anomalisa, Charlie Kaufman, Duke Johnson and Rosa Tran
Boy and the World, Alê Abreu
WINNER: Inside Out, Pete Docter and Jonas Rivera
Shaun the Sheep Movie, Mark Burton and Richard Starzak
When Marnie Was There, Hiromasa Yonebayashi and Yoshiaki Nishimura 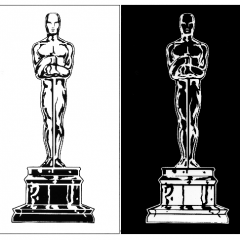 The Oscars have happened. The biggest night in the world's entertainment awards season is over.