In short, he offers us more promise than we've seen for sixty years.

This week, Jeremy Corbyn won the leadership of the Labour Party which would see him become the next Prime Minister if Labour were to win the next General Election. He won with 59.5% of the vote, the greatest Labour leader victory since 1992. Coming from a no-chancer to one of the most powerful men in the country, we looked at what his election would mean for our industry.

In the run up to the end of Labour's leadership vote, Jeremy Corbyn spoke and wrote about his promises to the arts and cultural sector.

He released a very comprehensive policy document dedicated to the arts written with acclaimed screenwriter, Frank Cottrell Boyce. The document is made up of the following sections:

He let his opinions known at the conference at which he launched his arts policy document which was videoed by Yannis Mendez:

"Because of the process of very elitist funding, because of the underfunding of arts projects the insufficiency of facilities in schools for music and other forms of creativity [the creativity in all of us] gets snuffed out, ignored, and forgotten."

"There has to be direct funding in to local government and it should be ring fenced so that local governments have to spend it on promoting and supporting local culture and local entertainment ideas."

Finally, he wrote a two-part article about his belief in the arts and artists. The full article was written for www.TheStateOfTheArts.co.uk - read it here. In his decades in politics he has worked closely with arts organisations and has seen arts provision flourish in his constituency of Islington North. He told of how every child deserves the chance to play an instrument and act on stage. He was quick to mention how much he believes in the importance of arts and culture in this country:

He wrote in one half about the economical benefits of the arts sector and the detriment that has come with cuts by the current Government.

Worth noting is the "devastating £82million in cuts to the arts council budget over the last 5 years and the closure of the great majority of currently funded arts organisations, especially outside London."

He contrasts this with facts and figures which demonstrate the worth of what art brings to this country such as the "half a billion pounds a year" that commercial theatre contributes to our economy.

"The arts and culture industry receives 0.1% of government funding but contributes 0.4% to GDP. The creative economy now accounts for 5.8% of all UK jobs. The arts are linked to 42% of inbound tourism-related expenditure while British films (themselves often supported by direct public investment) generated £1.4 billion of exports with a trade surplus of £916 million in 2013."

The other half of the article addressed the conscientious benefits that we offer to the country, how we must fight for the BBC and maintain the license fee. Many young people doing Arts Awards do it through extra-curricular organisations they end up at through outreach programmes which Corbyn's champions.

"Following the lead of successful programmes, such as those run by The Young Vic and the Hallé Orchestra in Manchester, we must support outreach programmes designed to involve young people both as participants and as audience members."

When hearing about facts and figures as well as sentiments like these with which many of us young people can relate, you can only wonder how cuts to the cultural sector are justified. 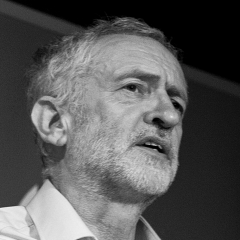 In short, he offers us more promise than we've seen for sixty years.