A look into potential union strikes in response to the cost of living crisis and how increasing wages could benefit the economy, not increase prices for consumers.

As summer temperatures continue to rise, so too has discontent among many public sector workers with the worsening cost of living crisis. In May, the inflation rate soared to 9.1% and is expected to further increase to around 11% in the latter half of the year.

Despite these unprecedented circumstances, wages have remained largely stagnant, leaving unions with no choice but to strike in the hopes of making a deal that will benefit their members.

The second-to-last week of June saw the UK’s largest rail strike in 30 years after tens of thousands of workers walked out over funding disputes. This was followed by barrister strikes from members of the Criminal Bar Association, who are now in their third week of walkouts as part of “a push for the government to uplift [criminal legal aid] rates by 25%.” Additionally, the National Education Union has threatened strike action unless the government grants an “inflation-plus” pay rise, and the NASUWT – The Teachers’ Union – will ballot members for national industrial action if the Government does not deliver a 12% pay award.

13 health unions have asked for an above-inflation pay rise to protect staff and patient services, and Christina McAnea, Unison general secretary, said: “The government has a simple choice, either it makes a sensible pay award, investing in staff and services and reducing delays for patients, or it risks a potential dispute, growing workforce shortages and increased suffering for the sick.” If a “sensible pay award” is not made, the NHS could see workers walk out across the nation. However, Liz Chinchen, Unison head of media, said it is a little premature to be speaking about proposed industrial action.

While strikes have the potential to be immensely disruptive to our everyday lives, there is logic in the purpose and economics behind them, as is evident in history.

According to Melanie Simms, professor of Work and Employment at the University of Glasgow, unions will only strike when they think they can get more from an employer than is currently being offered. A union cannot go on strike just for the sake of it; it needs a legitimate trade excuse – a legal issue that negotiation has failed and needs to be resolved – to do so.

“There is a lot of confusion when it comes to the perception that unions are speaking on behalf of workers,” Simms said. “Sometimes they do, but the primary job of a union is to represent its members and negotiate for better terms and conditions.”

In the context of the cost of living crisis, unions are, not surprisingly, asking for higher wages and other workplace improvements like pension rights. But discontent not only stems from surging inflation rates but also from the disconnect between the treatment of these workers who were so essential during the pandemic but are now struggling to make ends meet.

But as the threat of strikes in multiple sectors continues to rise, as has the narrative that the only way for employees to get a pay rise is by making costs more expensive for consumers. However, this is often not the case. When negotiating wages and improvements, employers don’t have to pass the cost of a wage increase onto customers; they may have reserves in a public organisation, or profits in a private company that they can use instead, Simms said.

Alternatively, companies could just take a lower profit altogether to pay for wage increases. According to Rob Maisey, Policy and Campaigns Support Officer at Trade Unions Congress, the speculation that union negotiations will give way to a second wave of inflation is inaccurate because high inflation rates are coming from interruptions in the supply chain as a result of the Covid-19 pandemic and the war in Ukraine. These factors are driving inflation, resulting in companies putting up prices in order to maintain profitability. As profits are not going down because of the shock to the supply chain, that means there is room for wages to go up if companies are willing to take a hit to their bottom line.

In fact, raising wages could actually help redistribute money from the top back to working class people who will pump that money back into local economies and communities, Maisey said.

“Once again, we’re having another crisis, and workers are going to pay for it. What’s going to be protected first: wages or profits?”

But not everyone agrees with the notion that strikes may help with wealth redistribution. Charlie Mullins, a businessman and former advisor to David Cameron and George Osborne, believes strikes and labour unrest are disruptive and have a negative impact on employees, employers, stakeholders, the government, consumers, and the economy, as they pitch groups of people against one another as raging debates erupt.

For Mullins, strikes are not the solution. What is needed is a clear economic policy and framework, while providing support to the most vulnerable UK households and avoiding slipping further into financial hardship.

“Striking is not the answer. Resolution is,” Mullins said. “Unsustainable pay demands will only keep inflation up for longer. Let’s face it, there is finite money available at this time of howling strain. It’s obvious to me that a certain amount of pay restraint is an unfortunate necessity while the government finds a way out of the worsening cost of living crisis.”

So, with so many proposed strikes, is there potential for negotiations to be made?

Even though both rail workers and NHS workers want the same thing, there are different economic and moral forces at bay that come into play when the unions representing these members decide to go on strike. In turn, this could mean that certain employers are more likely than others to negotiate quickly.

Ultimately, negotiations between unions and employers come down to each individual employer. Simms believes it likely that there are deals to be done below the 9% inflation rate, but this may not be the only changes that are made. When it comes to strike negotiations, there's almost always other factors besides the headline pay figure that need to be addressed, Simms said. This could come in the form of changing the way employees are working in order to encourage higher levels of productivity.

“One of the things we see with pay rises is that they often go alongside an agreement to improve the ways of work so that they’re more productive,” Simms said. “If you change the way that people are working, this increased productivity could allow for more profits.”

In sectors where the government is the employer or funder, the government has a right to get involved in the dispute. However, Simms has seen business people in both the public and private sectors say that the government “doesn’t seem to understand how running a business works, which is really unusual.” As a result, it is difficult to predict the actions the government will take to combat union strikes; they may choose to invest in some services rather than others, and prioritise settlement in some sectors. Alternatively they may refuse to get involved and leave employers to deal with the situation themselves.

“At the moment, I don’t see a big rationale or a big consistency in what [the government] is doing,” Simms said. ”They’re responding very ideologically by saying that strikes are bad, without thinking about their responsibilities and employers' responsibilities and how we get this resolved, which is really frustrating for all parties.”

However, it is almost impossible to predict the outcomes of the ongoing and potential strikes across the UK, so the nation will wait and wonder whether it will see a summer of disruptions or if the government and employers will step in to help combat the cost of living crisis. 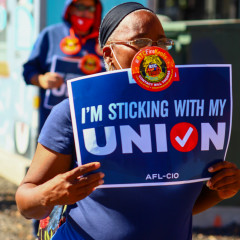 A look into potential union strikes in response to the cost of living crisis and how increasing wages could benefit the economy, not increase prices for consumers.