BAFTA TV Awards announces this year’s nominations, with It’s a Sin in the running for 11 awards

The nominations and award success of It’s A Sin marks a significant move towards industry recognition of LGBTQ+ talent both on and off-screen. This follows history being made at the Oscars, with Ariana Debose being the first openly queer woman of colour to win an award.

For best drama series the nominees are BBC Three’s In My Skin, ITV’s Manhunt: The Night Stalker, ITV’s Unforgotten, and BBC One’s Vigil.

Recently, nominations for the public-voted Virgin Media’s must-see moment have also been released with an eclectic array of choices: including Adele reuniting with her teacher during ITV’s An Audience with Adele, Squid Game’s ‘Red Light, Green Light’ game scene and Strictly Come Dancing’s Rose and Giovanni’s silent dance to Zara Larson’s ‘Symphony’. A slight political jab at Boris Johnson is made in the nominations, with Ant and Dec’s I’m a Celebrity … Get Me Out Of Here! satirical digs at Downing Street’s lockdown parties were also nominated.

Also nominated for the must-see moment is Rupaul’s Drag Race UK addictive song ‘UK Hun?’ with Bimini’s self-written verse being nominated for the award. The song includes the iconic line ‘Gender bender, cistem offender / I like it rough but my lentils tender’. The last on the list of nominees for the category include It’s A Sin with Colin’s devastating AIDS diagnosis. In a competitive category, it is difficult to know which way the public will swing when voting.

In the Entertainment Programme category, there are four nominees: An Audience with Adele (ITV), Ant & Dec’s Saturday Night Takeaway (ITV), Life & Rhymes (Sky Arts), and Strictly Come Dancing (BBC One). Last year, the winner was Life & Rhymes which became a groundbreaking win for a series with just one season. Life & Rhymes is a Sky Arts spoken word poetry programme highlighting some of the best up-and-coming artists the UK has to offer.

This year, BAFTA’s commitment to supporting and recognising new talent has resulted in a notably increased number of first time TV nominees. 28 out of 42 nominees have received their very first BAFTA TV nominations including the ray of sunshine that is Alison Hammond, Best Supporting Actress nominee Jessica Plumber (The Girl Before, also previously on Eastenders as Chantelle Atkins), and comedian/writer Rose Matafeo who is nominated for Female Performance in a Comedy Programme for her series Starstruck.

There are two Emerging Talent categories in this year’s contest. One is for Fiction, sponsored by Sara Putt Associates, and it highlights up-and-coming talents like Adjani Salmon (writer of Dreaming Whilst Black), Nathan Bryon (writer of Bloods), Nida Manzoor (writer/director of We Are Lady Parts), and Runyararo Mapfumo (director of Sex Education).

The alternate Emerging Talent category is for Factual stars that are ones to look out for such as: Adam Brown (director of Into the Storm: Surfing to Survive), Hugh Davies (producer of Football’s Darkest Secret: The End of Silence), Poppy Begum (director of Queens of Rap), and Sophie Cunningham (director/producer of Look Away).

It’s certainly a competitive year with an array of stellar performances and productions that are all worthy of taking a coveted Bafta home. For now, we shall have to wait and see what the results are during the Bafta Craft Awards on 24 April and during the main Bafta ceremony on 8 May. 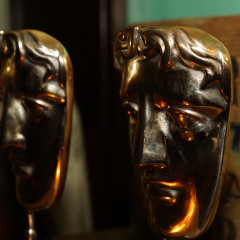 BAFTA TV Awards announces this year’s nominations, with It’s a Sin in the running for 11 awards