The iconic musician recently asked the streaming service to remove his work, following the spread of covid misinformation on the platform through Joe Rogan’s podcast.

Spotify has removed Neil Young’s discography from their platform, following his ultimatum that they either remove his music or the Joe Rogan podcast. Young called for the podcast to be axed due to Covid-19 vaccine misinformation that Rogan has been spreading of late, declaring that “they can have Rogan or Young.”

The Joe Rogan Experience is the most listened to podcast on Spotify, and is exclusive to the platform after they secured a $100 million deal with the comedian. Rogan’s podcast has been under significant scrutiny lately, most notably when 270 doctors, scientists, and healthcare professionals wrote an open letter to Spotify earlier this month expressing their concern about the questionable medical information and guests that the show champions.

This week, Young posted an open letter on his website to his label and management, which was later taken down. The letter read: “With an estimated 11 million listeners per episode, [The Joe Rogan Experience], which is hosted exclusively on Spotify, is the world’s largest podcast and has tremendous influence. Spotify has a responsibility to mitigate the spread of misinformation on its platform, though the company presently has no misinformation policy.”

The musician added, “I want you to let Spotify know immediately TODAY that I want all my music off their platform … They can have Rogan or Young. Not both.”

A spokesperson for Spotify spoke to the Hollywood Reporter on Wednesday, and confirmed that the service would be removing Young’s discography, saying: “We want all the world’s music and audio content to be available to Spotify users. With that comes great responsibility in balancing both safety for listeners and freedom for creators. We have detailed content policies in place and we’ve removed over 20,000 podcast episodes related to Covid since the start of the pandemic. We regret Neil’s decision to remove his music from Spotify, but hope to welcome him back soon.”

Young posted another statement online following the deletion of his catalogue. Writing on his website he called Spotify “the home of life-threatening Covid misinformation. Selling lies for money.” In the message, he mentioned that the decision was made because he was worried that young Spotify users specifically were “impressionable and easy to swing to the wrong side of the truth. These people believe Spotify would never present grossly unfactual information. They unfortunately are wrong. I knew I had to try to point that out.”

It has been highlighted  by commentators like Donald Trump Jr that Young sold 50% of his master recordings to the publishing company Hipgnosis in January 2021, so didn’t have full control over his work. The artist acknowledged this, and has clarified that he made an agreement with his record label, Reprise, owned by Warner Music Group, to allow for his discography to be removed from Spotify. Young wrote: “Thank you Warner Brothers for standing with me and taking the hit – losing 60% of my worldwide streaming income in the name of the truth.”

Now, the musician is pointing his fans in the direction of Spotify competitors like Apple Music and Amazon Music to access his catalogue, criticising Spotify for “continuing to peddle the lowest quality in music reproduction” whilst doing so. He thanked his supporters for sticking by him, stating: “I have never felt so much love coming from so many.” 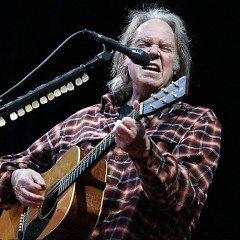 The iconic musician recently asked the streaming service to remove his work, following the spread of covid misinformation on the platform through Joe Rogan’s podcast.