Winners could end up playing on one of the festival’s main stages, alongside a share of £10,000 to help develop themselves further.

The organisers of Glastonbury festival have announced that they are bringing back their Emerging Talent competition for 2022. The contest runs every year, and sees rising grassroots artists submitting their work for a chance to win a slot on one of the main stages of the festival.

The event is supported by PRS For Music, as well as the PRS Foundation, and opens for prospective applicants from Monday 31 January up until 7 February. The competition is accepting applicants from any genre, but only artists from the UK and Ireland are eligible to enter. Prizes for the Emerging Talent contest, alongside performing on a stage at the festival, include £5,000 as a “talent development” reward. Two runners-up will be awarded with £2,500 each.

A selection of 90 acts will be on the eventual longlist, chosen by an industry established panel of 30 music writers, and the group will then be reduced to a shortlist of eight by judges that include members of the Glastonbury team. The winners of the competition will be decided at a showcase in Pilton, a town in Somerset where the festival is set to take place.

Emily Eavis, festival organiser and daughter of Glastonbury festival founder Michael Eavis, told Under The Radar: “We’re so happy to announce the return of the Emerging Talent Competition, which is always one of the first big markers that another Glastonbury is on its way. The competition has helped us unearth so much amazing music over the years and I’m really excited to hear this year’s crop of entries!”

PRS Foundation CEO Joe Frankland also said: “Having been lucky enough to attend the live finals in Pilton for a number of years, I know it’s harder and harder each year to choose the winners. So many artists have been discovered and made progress in their careers.”

“Thinking back to Declan McKenna, Flohio, She Drew The Gun, Che Lingo and 2020’s winners including R.A.E (who will perform at this year’s festival), we can’t wait to see who comes forward in 2022.”

There is more information and details about applications to the Emerging Talent competition that can be found on Glastonbury’s website.

Header Image Credit: "Crowds" by Βethan is licensed under 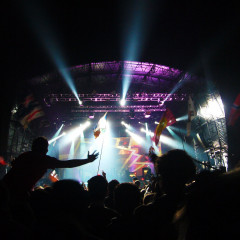 Winners could end up playing on one of the festival’s main stages, alongside a share of £10,000 to help develop themselves further.