In light of recent statements made by the author of the Harry Potter franchise, multiple quidditch leagues have announced they are looking for name changes

Quidditch, the sport created by author JK Rowling for her Harry Potter book franchise, has seen exponential growth in popularity over the years since the release of the Harry Potter feature films. Multiple leagues in the sport have been created since students adapted the idea into a real-life competitive sport. Now, some of the largest leagues who play quidditch are looking to change their names in order to distance themselves from the author's anti-trans stance.

A new name for the sport is yet to be decided. Currently, the leagues are titled U.S. Quidditch and Major League Quidditch in America, and UK Quidditch in Britain, but they have all recently announced that they will be using surveys to decide on the future titles of their competitions.

Both American leagues released a joint statement this week, announcing the call for a name change. Major League Quidditch’s commissioner, Amanda Dallas said: "For the last year or so, both leagues have been quietly collecting research to prepare for the move and been in extensive discussions with each other and trademark lawyers regarding how we can work together to make the name change as seamless as possible."

The move could prove fruitful for the popular leagues, with a name change opening doors to  new sponsorship and broadcasting opportunities currently unavailable thanks to the trademark that Warner Bros. holds over the name ‘quidditch’. The name change could also bring about more opportunity for the leagues to further expand without the connection to Rowling.

U.S. Quidditch Executive director Mary Kimball mentioned: "I believe quidditch is at a turning point. We can continue the status quo and stay relatively small, or we can make big moves and really propel this sport forward into its next phase, renaming the sport opens up so many more revenue opportunities for both organizations, which is crucial to expansion."

On Monday, UK Quidditch announced they are supporting the US proposals and will be following suit, they have stated: “The issues surrounding both the Warner Brothers trademark and JK Rowling’s remarks and statements against the transgender members of our community have accelerated this desire to move our branding away from the ‘quidditch’ name and shift towards our own identity.”

“We cannot continue to call ourselves quidditch and be associated with JK Rowling while she continues to make damaging and hateful comments against the many transgender athletes, staff, and volunteers who call this sporting community home.”

The growth of the sport and revenue created by it contributed to the decision to change names, but the leagues have also said that they want to distance themselves from any association with JK Rowling, despite the fact the sport was initially a concept created by the author.

Over the past few years, Rowling has made countless remarks regarding her position on transgendered people. In 2020, she shared a link via Twitter to an article about the access to menstrual products during the pandemic. The article used the term “people who menstruate”, to which Rowling seemingly took offence to, as it did not state ‘women’. She tweeted in response, " 'People who menstruate.' I'm sure there used to be a word for those people. Someone help me out. Wumben? Wimpund? Woomud?" The author then continued to defend her stance on Twitter and also on her own website, after being criticised heavily by fans of Harry Potter and cast members of the films, such as Emma Watson, Daniel Radcliffe, and Rupert Grint.

The real-life quidditch leagues have made an effort to convey their disagreement with Rowling, and have stated that transphobia is not tolerated within their organisations. They said: "Our sport has developed a reputation as one of the most progressive sports in the world on gender equality and inclusivity, in part thanks to its gender maximum rule, which stipulates that a team may not have more than four players of the same gender on the field at a time.” They added that the organizations “feel it is imperative to live up to this reputation in all aspects of their operations, and believe this move is a step in that direction." 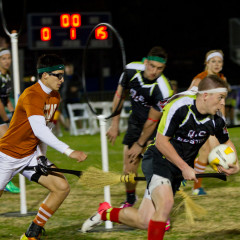 In light of recent statements made by the author of the Harry Potter franchise, multiple quidditch leagues have announced they are looking for name changes