The developers of Fortnite and the Unreal Engine have bought the music gaming company Harmonix, who created Rock Band, in an attempt to "reimagine how music is experienced, created and distributed".

Epic Games, the developer of one of the most popular games of all time, Fortnite, as well as the universal game engine Unreal, have recently acquired the company Harmonix, who are known for creating music games such as the Rock Band and Dance Central series, as well as last year’s Fuser. The joint announcement was made last week, and Harmonix have mentioned that they will “create musical journeys and gameplay for Fortnite,” but will not be abandoning their other franchises.

The acquisition of the Boston-based music game company follows a fruitful period for Epic, as they have leaned further and further into the music industry over the past couple of years. Epic’s flagship game Fortnite has hosted many musical events for a myriad of major musicians, and their Unreal engine serves as the foundation for 3D music videos created by Sony Music’s Immersive Music Studios.

Epic Games is backed by Sony Corporation, and have accrued a $26 billion valuation. The company have announced that they will now be collaborating with Harmonix to create musical experiences for Fortnite, whilst Harmonix continue to support their existing games such as Rock Band 4. Epic claims that they intend ”to build the metaverse”, and that Harmonix and their team’s “expertise is needed to reimagine how music is experienced, created and distributed”.

Harmonix was founded in 1995, and was first acquired by Viacom in 2006, who then sold the company four years later to Harmonix-SBB Holdings LLC. The firm’s Rock Band franchise started in 2007, and had exceeded a billion dollars in revenue by 2009. They created ‘The Beatles: Rock Band’, which was dubbed by New York Times at the time as “the most important video game yet made.” Harmonix also created the music-mixing game DROPMIX in collaboration with Hasbro, as well as the Dance Central franchise, the latter of which is said by Harmonix to have “set the standard for full-body motion gaming, with best in class detection and real-time feedback”. It has not been disclosed how much Epic paid to acquire the company.

Nothing has been announced as of yet regarding projects that the two companies plan on developing, but Harmonix have said that they wish to “challenge expectations as we bring our unique brand of musical gaming experiences to the Metaverse.”

They added: “Over the last 26 years we have pushed ourselves to redefine how people experience and interact with music. From the earliest days of The Axe to Guitar Hero, Rock Band, Dance Central, our VR titles, FUSER, and everything in between, we have aspired to redefine what a music game can be.”

Co-founder and chairman of Harmonix, Alex Rigopulos said: “Harmonix has always aspired to create the world’s most beloved interactive music experiences, and by joining Epic we will be able to do this at scale. Together we will push the creative boundaries of what’s possible and invent new ways for our players to make, perform and share music.”

Alain Tascan, vice president of game development at Epic Games stated: “Music is already bringing millions of people together in Fortnite, from our emotes to global concerts and events. Together with the Harmonix team we will transform how players experience music, going from passive listeners to active participants.”

Fortnight has already held well-attended virtual concerts from musicians such as Marshmello, Travis Scott, and Ariana Grande. Other gaming companies that have held live virtual concerts include the festival Block by Blockwest in the game Minecraft, as well as performances from Lil Nas X and Royal Blood on Roblox.

The biggest ‘metaverses’ now seem to be competing for content, with an enormous amount of money being injected into each one, in an attempt to rival both each other and Facebook’s newly announced metaverse through multiple creative mediums. Notably, The British Fashion council has just announced a new award category for virtual clothing designs created within Roblox, and Facebook have also said that they will be implementing NFTs into their digital worlds.

The gaming scene seems ripe for virtual musical integration, and each event that has transpired has been wildly successful. The future of virtual concerts is an exciting, albeit rather unsettling prospect, as although the events can be a saving grace for young fans in situations such as the recent Covid-19 lockdowns, it is uncertain how these virtual concerts held within the metaverse may affect real-life performances, venues, and grassroots music in the near future. 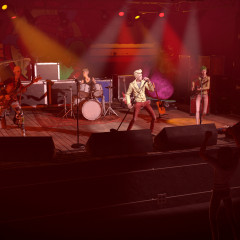 The developers of Fortnite and the Unreal Engine have bought the music gaming company Harmonix, who created Rock Band, in an attempt to "reimagine how music is experienced, created and distributed".