Chris Martin takes some time to talk to Voice about the show, inspirations, and to give advice to young people.

I am the only person on earth called Chris Martin.

A feel-good hour of stand-up comedy.

It's just massive. You can literally watch stuff from 11am till 3am. Everywhere is a venue. I'm pretty sure you could look in a bin and there'd be a show in there.

The free fringe is the biggest change. It's become the widely accepted norm for established and new acts. The beautiful thing is it makes it affordable for everyone to perform there now.

I've always wanted to not have a real job. This constitutes that. I was also captivated by Eddie Murphy and Jack Dee when I started. Making thousands of people laugh looked like the best thing on earth.

Uber driver. You get to chat to people all day, and drive a Prius.

Stunt man. I met one the other day. He gets paid really well to fulfil my repressed male fantasies of jumping off buildings and rolling cars. Pity I'm too big a coward to ever do it.

I was 3 and I wrote the letter C on my bedroom wall in pencil all over it. I'd just learnt to spell and was showing off. Turns out I'd written it backwards. So, I obviously hadn't learnt to spell that well...

Nah. I leave that to people who are good at that. I can only talk about stuff that's happened to me because I know nothing about anything.

Public sentiment always changes. I try to just do what I do.

Not owning a fidget spinner

Craig David. One of the most under-rated musicians the UK has ever produced.

I've done both. And both are great. I love free at the moment because anyone of any age can afford to come. If you're at the festival for a week and you're paying for tickets it can really add up so the more the merrier on the free fringe.

14:45pm. The Peartree Pub. Be aware my show does clash with Doctors on BBC1.

www.chismartincomedy.co.uk or just google Chris Martin. As I said I'm the only person with this name.

Chris Martin: The One and Only Chris Martin is performing at the Peartree Pub at 14:45 until 27th August (not 19th). For tickets and more information visit the Ed Fringe website. 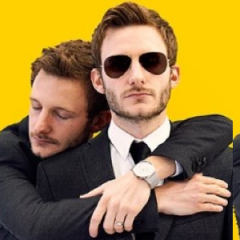 Chris Martin takes some time to talk to Voice about the show, inspirations, and to give advice to young people.