Composer and lyricist Alexander S. Bermange talks to Voice about his job, and his new album Wit & Whimsy

The creativity, the flexibility, and the opportunities to collaborate with others who possess complementary skills.

The non-creative elements (i.e. the "admin"), the tendency among many to avoid taking risks, and the less scrupulous characters one sometimes has to deal with.

Most recently, getting to work with many of my idols on Wit & Whimsy, an album of my comedic songs featuring several "national treasures", various famous faces from TV, and numerous popular West End stars. I was starstruck throughout the process!

I was writing and putting on shows when I was at school and university. Subsequent networking, keeping my eyes and ears open for opportunities, and finding ways of working with existing contacts, helped to progress my career. I've never actually worked outside the arts.

Writing a mini-musical overnight for the Old Vic's 24-Hour Musicals. Having mere hours to create a show to be performed the following evening by an all-star cast in front of a paying audience was terrifying, but ultimately exhilarating. As for how I overcame it, the deadline *made* me overcome it. I find that deadlines usually have that effect!

Write as much as possible and seize every opportunity to have your work performed. And be thick-skinned.

Wit & Whimsy, the star-studded album of Alexander's comic songs, is released on Friday 31st March 2017; a live show featuring performances of songs from the album is being staged at The Hippodrome in London's West End on Sunday 30th April 2017. For further information, please visit www.bermange.co.uk or follow @Bermange. 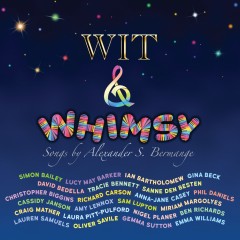 Composer and lyricist Alexander S. Bermange talks to Voice about his job, and his new album Wit & Whimsy