From Random Acts Midlands, dancer, Caldonia Walton's Everyday Choreography is a joyful poem about the choreography of our everyday movements. We asked about her exploration of dance on screen.

I applied with my idea to an open call for applications on the Rural Media website, and then had a phone conversation to talk through my idea before being officially taken onto the programme.

I had been interested in exploring the choreography that happens in our everyday lives for a while. You can see choreography in how people people walk down the street, pass by each other on tube platforms, or co-ordinate themselves round each other in a supermarket. It was really the Random Acts brief, of a short 3-minute film, that made me think more closely about a narrative that could come across in that short amount of time.

Very difficult! I have favourite films for different genres! But one that always sticks out for me is Amelie, for the photography and music.

Following this project, I performed in a dance film Millionfish by Lizzie J. Klotz, which has just been released. I enjoyed working in dance on screen projects last year, and would definitely be interested in pursuing it further in the future. This year, I am working on a solo dance theatre work Noise Control with Drunken Chorus theatre company, and choreographing for two musicals, The Quentin Dentin Show, opening for a six-week run in the West End, and Summer Nights in Space at Vaults Festival this February.

It gives young people an incredible opportunity to gain a professional experience of creating a film. I feel very equipped with the knowledge of how to produce and create film work for the future and I would feel confident talking to producers, directors, etc, about the technicalities needed to put together a successful film.

A lot of First Acts films are filled with depth and a great deal of angst. What made you divert from that approach?

To be honest I didn't have much contact with others filmmakers during the process therefore I didn't know what others were creating! I wanted to create something which expressed the sheer joy of dancing with music, and that everyone can! I also wanted to ask people to look for choreography and fun in the everyday, movement is all around us, embrace it!

What were the actors' reactions to be asked simply to dance around in the park?

They were totally up for it!

A lot of planning! A lot of Skype-ing with my mentor Suzie Norton to understand everything that needed to be done before the shoot and a lot of organising between the team, the dancers, finding the main part, location scouting, rehearsal space, keeping in budget...

What influences did you have by makers/pieces that mix dance and moving image?

Watching Lloyd Newson's The Cost of Living many years ago excited me about dance on film and how movement could be placed in an everyday setting. I have also been influenced by Wendy Houston's work Touched, the heightened gestures and characteristics of people in a bar and where the camera can decide to focus the audience's attention.

The hardest part was learning how to produce the film myself! I could choreograph the movement and create the music, but I didn't have much experience of completing a treatment, a script, understanding the equipment I would need or even a call sheet. Having a film specialist mentor was invaluable in guiding me through that process.

Do you think dance is a greater vehicle for storytelling than conventional filmmaking?

They both have their merits, dance can be a fantastic tool for storytelling in many ways, conveying emotions and ideas that words may not be able to, but then it might not be able to convey elaborate plot twists.... I am actually interested in mixing dance with conventional filmmaking, could there be 'episodes' of dance for TV?

Sticking your earphones in is often looked down upon, particularly by older generations. What would you say to naysayers of losing yourself in your own music?

Lose yourself or find yourself in music, use it to escape from the world or to find a new outlook. Move your body to the music and see what happens. Music is good for the soul, try it! 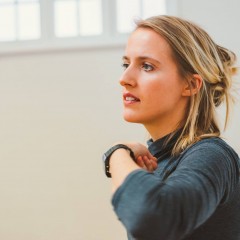 From Random Acts Midlands, dancer, Caldonia Walton's Everyday Choreography is a joyful poem about the choreography of our everyday movements. We asked about her exploration of dance on screen.