I am a stand-up comedian from London. After being sacked as singer from my band I was forced to look in the mirror (which I enjoyed doing anyway, I was in my prime at the time). I am now a comedian of 5 years, and live for comedy's call. I leave my phone on at night just in case she needs me.

My show is mainly about girls, music, and household items. I am drawn to the small details in relationships, what makes things exciting and dazzling, and I am fascinated and thrilled by the stuff you spot and remember if you move your head slightly to the left. I guess that's our job.

Watching Buddy Holly The Musical ('Buddy') when I was 8. My birthday. I couldn't have been more excited, I loved him. We listened to him in the car everywhere we went.

A love of voices and impressions.

A love for making people laugh, it's just my drug, I can't help it, I want as many moments as possible to be fun every day.

Also a sense that I am better at talking to whole groups rather than people within them (but I'm working on it).

Mmm, would've been some time in 2013…if by pro you mean any kind of payment. I almost certainly didn't know it was paid until after when I was slipped £10 (or £20 if I was lucky), but I'm sure it was great, in 2013 I was a heart broken mess and had never been better on stage. Perhaps being broken is good for the job in some way. Makes you more open, trying less to hide. Plus I was glad not to be crying in a car park or disabled toilet for 10 minutes.

The ridiculousness of it, the sense that people can have such a reaction and good feeling from stuff you say. As my mate Ben Norris said "It's a privilege". It also allows me to not have to wake up before 10am.

Occasionally the people in an audience all seem to have agreed that they're not in the mood to laugh, which leaves you feeling deeply stranded like a man trying to ask for directions to a hotel he has forgotten the name of in a country that doesn't speak English, while the temperature begins to drop very, very quickly.

If the people clap and cheer at the end.

If I struggle to sleep after from the euphoria (it happens).

If people shake their heads when they come up and talk to me, shaking it with a bereft quality like they can't believe it. I only accept bereft people's praise now. Nodding, smiling people, or anyone with thumbs up can clear off, I've tasted sweeter glories, it no longer satisfies me.

Bill Hicks. Man the guy was pure charisma. And his voice and impressions are second to none.

YOU HAVE TO. THERE'S NO CHOICE. All the wrong reasons – that I'd miss out on something everyone else was doing, that Alasdair Beckett-King said he'd share an hour with me in 2013 and he seemed to know how to do things (he suggested Edinburgh in the first place). A sense that you can't call yourself a comedian till you've done it and done it and done it and are broken every year throughout September.

Yes, the audience is just so varied in mood and feeling every night - the demographic just slides all over the place, you cannot know who is going to be your crowd or what they'll be into ever! Such uncertainly is not so common on the circuit. In Edinburgh you walk out and you're immediately trying to work out who the hell you're talking to, having road tested the show in what now feels like an entirely different another dimension.

Know how cool you are. Going to gay clubs, listening to Billy Idol, making comedy films on a camcorder, mixing anti-depressants with Hooch. I'd say "Just trust yourself Tom, there's no need to doubt how cool this all is". And stop trying so hard with girls.

Do it! It's the coolest job in the world, chuck it all in, gig loads, do it your way, listen to smart people, dig deep, don't listen to your teachers (if they warn you off it), they're idiots and don't want you to be happy. 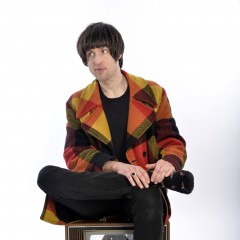