I used to do some wicked stuff in primary school with watercolours and tie-dyeing. Apart from that we had a few awesome school productions, which fueled my interest in performance.

My brother used to attend a drama group and they put a few productions on and I used to always want to be up there This maybe led me to get involved with some school productions and that really fuelled my interest in performance. I liked being on stage and seeing the audience react to what you do. It was and is a great feeling.

I can't say I do remember it because as a comedian there is a blurry area at times - essentially your first professional performance is your first paid gig. However that doesn't necessarily mean that it's a good or particularly noteworthy gig. I remember unpaid ones at big comedy clubs around that time more clearly. Performing to that many people was a real buzz and I felt like I'd really achieved something afterwards.

I would say you get to do some great things, for instance because of my television work I can say that I've stroked a Rhino. How many people can say that? In terms of comedy it's the immediate satisfaction of seeing an audience respond the way you want them to, to something that you've written for them. It's a rush when it goes well that is hard to replicate.

I think that Comedy is probably the most risk-laden type of performance. If you're an actor in a play or programme and the audience doesn't like it, then they'll still sit there, maybe fall asleep, but you'll probably still get at least a labored applause at the end. With Musicians, the audience could have conversations with each other and it still not seem like the gigs going badly. As a comedian there is nowhere to hide, if you don't get laughs, it's gone badly. Both you and the audience feel awkward as you're entering a situation under the expectation of them laughing at what you have to say. When that doesn't happen it's dreadful. Everyone dies on stage no matter who you are, it's just an occupational hazard but it's certainly the worst aspect of the job.

Well I think that is something that a performer can feel. A basic barometer is whether you're audience laughs at the points you want them to. However in general it comes down to what as a performer you want to achieve some shows are not hilarious but are really engaging and the audiences leave happy. Some are very funny at points but it's a not particularly engaging show, which can leave the audience deflated. I personally want both - I want them laughing and engaged - if I can do that, the show's gone well.

Bob Marley. He's just a really inspirational guy. I'm not sure if comedy and Reggae can work. But me and Bob would give it a go. Probably run a reggae comedy night called "Could you be laughs". It'd be great.

I love the Fringe it's the biggest and best comedy festival in the world and whenever you start working on a project like a show, Edinburgh is the ultimate proving ground.

Yes I think the audiences give you more time to get your ideas out. At standard nights in comedy clubs there's a lot more pressure from the audience to get to the jokes quickly and often they don't want things to be that complex whether its themes or delivery. That's my experience anyway.

Appreciate Arsenal Football clubs success right now because it won't go on for much longer.

You have to believe in yourself more than anything. Even people who genuinely want the best for you won't always be right in their advice, be strong on what you want. Of course work hard, but also try to find what makes you special and different, your job in trying to stand out will be much easier if you're not like anyone else.

On twitter and instagram I'm: @johnnyicochrane or @johnnyandinel I also have a radio show on Virgin Radio from 7-11pm on Friday nights check it out. 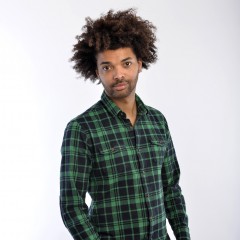