This month is LGBT History Month, and their theme is Religion, Belief and Philosophy. Here, Sue Sanders, Professor Emeritus at the Harvey Milk Institute and Chair of School's Out discusses education, making progress through the arts and tackling stereotypes.

What is LGBT History Month, and when did it begin?

LGBT History Month began back in 2004, inspired by Black History Month and the abolishment of Article 1 in Section 28 of Local Government Act 1988, which stated, "A local authority shall not intentionally promote homosexuality or publish material with the intention of promoting homosexuality".

The aim of the event, therefore, was to make LGBT people - and what they've been through - visible to the government and public, and therefore promote their identity and importance in British society overall.

How did you first become involved?

I was the chair of the Schools OUT Charity that was established in 1974, but it wasn't until 2004 after we delivered Black History Month that we realised that we needed to establish a LGBT month as well, both due to the abolishment of Section 28 and the feeling that the LGBT community as a whole needed more recognition.

Why is LGBT History Month important in 2016, and do you feel there has been progress in recent years?

There has been a massive amount of progress. Prior to abolishment, a majority of schools didn't bother delivering LGBT History as they weren't allowed, and even afterwards there was still a lack in decent LGBT education, as well as resources.

We launched our first National LGBT history festival in 2015 (which was a success), and now we are running 6 festivals this year across England.

What are the main issues that are faced in delivering LGBT History to schools?

The main issue is that the teachers don't receive equality/anti-discrimination training, so as a result they can't support the children or young people who are being bullied or facing discrimination. This kind of issue was also tackled during the Stephen Lawrence inquiry, when the concept of institutional racism was introduced to the public. We built on that definition to institutional oppression so to be inclusive of all groups that are oppressed and be intersectional.

Rather than tackle homophobia in the classroom, we feel that teachers should be given resources on how to educate about LGBT and Racial Themes to the pupils. However, it's still very hard in 2016 to get LGBT History into schools, as teachers are snowed under with so many demands

This year's theme, as you may know, is based around Religion, Belief and Philosophy within the LGBT community, and how it affects the individual who may experience a conflict between their beliefs and sexuality. The important thing about this year's theme is tackling stereotypes – not ALL religious cultures are against homosexuality or same-sex marriage.

In fact, we've actually seen more religious communities become more open about LGBT themes, thanks to the influence of mass media and an overall cultural acceptance of LGBT people. However, there is still much to do as many organised religions are still perpetrating homophobia and they need to be challenged

Is it something that mainstream education still needs to pick up on more?

Of course it does! LGBT History needs to be taken on by schools and taught to the younger generation so that our work is recognised and the LGBT community gains more respect and acceptance.

It's clearly also about making minds more open to equality movements – they've been around for years. For example, the suffragettes in the early 20th Century weren't all white middle class women. There were black, working class women, and women loving women who were fed up with not having their rights.

Why do you think there is such a struggle between religion and sexuality?

I believe that where there is a struggle, it's usually due to religion, such as the Church of England, still being based on patriarchy – so basically anything that isn't a man or seems to challenge the male image (who is usually on top or hierarchy) is considered weak and shouldn't bother being a part of society.

Women, in this case, are not considered masculine but they are considered property due to their ability to procreate. LGBT, in this case, is seen as challenging the male image, so people still assume that they're "less of a man" after many years of patriarchal control. As a result, it's difficult to celebrate LGBT in religion as it obviously challenges everything that they've been brought up to believe. But, after many long years, we seem to be making progress.

What role do you think the arts can play in raising the profile of LGBT conversations?

The arts have a massive role in raising LGBT awareness. In fact, it is usually LGBT-influenced art that has helped change views over the past 4 decades. The theatre, for example, has usually been a great place for LGBT people to present cutting edge ideas, and gain a sense of belonging overall.

And we can't forget about the impact that modern TV and film has had on changing attitudes - programmes like soap operas have been quite effective...

Finally, what advice would you give to any young LGBT person who was looking to get involved with LGBT History Month?

It's easy – look at different websites, go to LGBT events, visit the local LGBT youth group. Just get involved and make a stand by proving you have a voice in society! 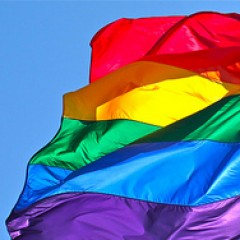 What goes on at...LGBT History Month

This month is LGBT History Month, and their theme is Religion, Belief and Philosophy. Here, Sue Sanders, Professor Emeritus at the Harvey Milk Institute and Chair of School's Out discusses education, making progress through the arts and tackling stereotypes.