Voice MagInterviewsWhere are they now?…

Multi-award winning writer and director Rob Savage talks about his profession, and the impact Arts Award had on his career...

I am currently working on a number of projects that are at various stages of development. My first feature, Strings, is being released across the UK this year and I am currently developing my second feature film and have been commissioned to write a script for a third to shoot shortly after. It's very odd – I've been jet-setting around the world to promote Strings for the last year, but since then have barely left my flat. While writing The filmmaking process is a strange mix of the extremely social and the obsessively reclusive.

You've had great success recently, winning lots of awards – what are the highlights of your arts career to date?

I think the main highlight of my career will always be my first film, Strings. It is a 90 minute drama that was self funded and shot over 30 days when I was 17 and has since gone on to screen at festivals all over the world, be bought for distribution by the fantastic Vertigo Films and win at the British Independent Film Awards, in front of an audience of some of my heroes, including ex-Python Terry Gilliam, who gave me a nod as I headed for the stage. For such a small film, shot around my hometown of Shrewsbury, to reach an audience of people who inspired its making in the first place never ceases to amaze and inspire me.

Also, for the past three years I have been a tutor on a filmmaking course at the British Film Institute, which has incredibly rewarding. The students I teach on the course are so inventive and excited by the possibilities of the medium, which has kept me creative even during the long periods of developing a film that are not particularly creative.

How did you get into making films? Has it always been a passion?

I started out wanting to be a comic book artist, which fed into film – both are about using visuals to tell a story and even to this day I design my movies by drawing every shot, which allows me to pre-visualise the final product. Through comic books I became interested in animated films, an enduring favourite being Akira. One day my dad sat me down in front of Francis Ford Coppola's Apocalypse Now, which completely blew my mind and made me reconsider the possibilities of the medium: here was a film where the visual language was communicating something greater than simple plot mechanics. I was hooked.

From there I started watching everything I could get my hands on, taping every classic film that came on TV, watching them again and again and dissecting every aspect of them. I saved up for a cheap camera and began filming everything. I would follow my family around the house with it, yelling "ACT NATURAL" at them and practicing all of the techniques I had seen in the movies I had taped.

Slowly the films got better and I started to share them, eventually sending them out to small film festivals and picking up a couple of awards. Living in Shrewsbury, I still felt very disconnected from the film industry, which I saw as only existing in London, and so I decided that I needed to make something that would get me noticed, something that would become Strings, my first feature film.

I did a Silver Arts Award during my GCSEs, though not in film. My Arts Award was to do with comic book illustration and the final result was a professionally made short comic strip. Until then I hadn't really designed my comics for an audience and often left my sketches unfinished, but seeing how professionally I could present my work and the impact it had on those who saw it, I started to become determined to finish anything I started. Afterwards I started publishing a short comic strip in the school magazine, which went on to win a Blue Peter award.

What do you feel was the impact of doing Arts Award before getting into film-making?

I think the main impact was to do with my organisation. By imposing deadlines on an activity that I would usually only do for my own enjoyment I was able to achieve far more than I would have working on my own time. From age 16, when I began work on Strings, I have treated filmmaking as a job and even now work self-imposed office hours. I think this is what distinguishes those who manage to make a name in such a competitive industry – there are lots of people who will tell you that in order to achieve your dreams all you need to do is pick up a camera and be passionate, but the reality is that nobody has ever succeeded without planning, hard work and discipline, as un-sexy as that sounds.

You now work with young people doing their Arts Award – can you tell us a bit more about that?

The students on the BFI course that I mentioned earlier are balancing a Silver Arts Award with making a short film and programming and running an entire three day film festival at the BFI. They are trying to push themselves in areas of film that they are less comfortable in and learn more about the overall process, which is exactly what I did on Strings, on which I took on the roles of Writer, Director, Cinematographer, Co-Producer & Editor. They have just finished their final films and even from a glance you can tell that the Arts Award has had an impact on them and their understanding of how to make a professional piece of film.

I know that you did Film A-level and went on to do a film degree in Gloucester but left when you started getting work – do you feel it is better to take the industry route rather than the academic one?

It's dependent on the person, as well as the area of film that you want to move into. I had always wanted to be a director, which is a position where your entire employability is based on your work and not your qualifications. I was already earning enough from filmmaking that I felt comfortable going out into the real world and making my way, but only because I had offers and opportunities that I would have missed out on being at university. If I had not have had such luck, I would have definitely carried on with my degree but not for the sake of the course, instead for the free time it would have afforded me. The best thing about being in full time education is being surrounded by likeminded individuals and not having to financially support yourself. This is a freedom that you will never have again and I would still cite my first year of university as being invaluable towards my growth as a filmmaker.

I hope that I will be in a similar position to the one I am in now: making the projects I want to make and being able to make a comfortable income from it. I hope that the projects I work on continue to grow in size and ambition as they have been doing, and that I am able to push myself creatively from one project to the next. I think that's the dream of anyone working in a creative industry: to be able to feel fulfilled artistically, as well as being successful professionally. It's a tough balancing act.

Do you have any tips for budding film-makers?

Make the most of your time in school, college and uni. Make as many projects as you can and work with only the most enthusiastic people. It's better to have a team of three people who are all excited to be a part of the project than a team of 30 who would rather be at home. It's also important to remember that while it may be enjoyable, you are aiming for it to become a profession. Treat your work as though you are being paid and be strict with yourself and you will be surprised how quickly you will transition from working for yourself to working within the industry.

In January, Rob won the award for Best Music Short at the London Short Film Festival for his music short "Took Them Away".

Enjoy other examples of Rob's work at www.rob-savage.co.uk 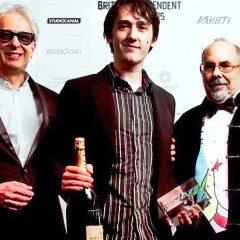 Where are they now? with film maker Rob Savage

Multi-award winning writer and director Rob Savage talks about his profession, and the impact Arts Award had on his career...