16 year old Saadia Sajid is Head of the Public Affairs board at Newham Youth Council, Youth Ambassador for Model Westminster, Youth Voice Secretary for London at the British Youth Council, overseeing UKYP and has recently joined the Youth Branch of the Labour Party.

What is your earliest memory of politics?

Barack Obama being elected as President of the US, being the first African-American to hold this office was my earliest memory of politics. As a representative of an ethnic minority, it was extremely inspirational to see this come into fruition.

When did you first decide you'd like to get involved with politics?

At the age of 15, I found that despite having such avid views on education, the NHS and youth unemployment, I could not have my voice truly heard in the democratic system owing to the fact I was not yet 18. Thus, I took the approach of campaigning for Votes at 16 and joining a youth branch of a political party.

Which political platforms do you work with?

Locally, I am Head of the Public Affairs board at Newham Youth Council and Youth Ambassador for Model Westminster, working on social policy and youth engagement in Politics. On a regional level, I am an elected Youth Voice Secretary for London at the British Youth Council, overseeing UK Youth Parliament and assisting the Procedures group with BYC conventions. In addition to this, I have just recently joined the Youth Branch of the Labour Party.

Which key areas are you involved with?

As a youth representative, my concentration lies with getting young people to interact with their MPs. At the moment, young people feel as if it's ineffective to campaign for change because no one listens to them, and that party politics is alien to them. I work to change this by opening up effective doors for young people through social media, as well as setting up educational services for young people to educate themselves regarding the democratic system.

Why do you think some politicians overlook young people's voices?

There seems to be an existing vicious cycle engrained in political nature, which takes the form of politicians catering their policies to those that vote. They deem young people as a disconnecting sector of society due to the low voter turnout amongst 18-24 year olds. Yet, young people believe the problem lies at the fact that politicians are completely unrepresentative of the general electorate. Most MP's are 40+; a third of them went to private school yet only 7% of British children attend independent schools. This seems to be logically unjust. It is evident that unless politicians are incentivised to cooperate with young people, then our voices will endlessly be ignored which is why Votes at 16 alongside political education is so vital!

How do you balance a political life with a teenage life?

Politics is very much a hobby and passion, I would class it as part of my teenage life. I dedicate copious amounts of time towards school, and a couple of hours a week browsing the internet on governmental matters or watching the Leaders' Debates that have proven to be extremely captivating!

What are the highlights of your political life?

As cliché as it may sound, the highlight of my political life is meeting like minded young people through UK Youth Parliament that possess political drive and genuinely want to make a difference - as we are political change agents of the future generation! Also, being selected alongside 10 other young people across the UK forming the Youth Select Committee, collating an inquiry on Votes at 16, and then receiving a response from the government was a once in a lifetime opportunity!

What is the biggest challenge in your political work?

Proving the stereotype of disengaged youth to be untrue. However, it is proving to be possible seeing as 478,632 young people voted in the annual Make Your Mark Ballots on matters that affect them the most.

What advice would you give to other young people hoping to get involved with politics?

Grab hold of every opportunity to voice your opinion. You don't have to solely align with a political party to be engaged in politics. If you have opinions on education, health care or the democratic system in itself – sign petitions, start campaigning or even put yourself up for as a candidate for UK Youth Parliament! Get involved through youth pressure groups and show those politicians that we have as much aptitude to make a difference as they do. 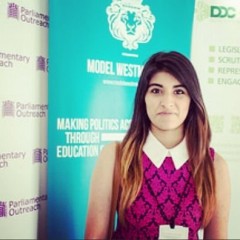 16 year old Saadia Sajid is Head of the Public Affairs board at Newham Youth Council, Youth Ambassador for Model Westminster, Youth Voice Secretary for London at the British Youth Council, overseeing UKYP and has recently joined the Youth Branch of the Labour Party.