This Summer, I was set the task of learning all of my lines for my GCSE Drama scripted performance. It got me thinking about my methods for learning lines and had me experimenting with some new techniques.

Learning lines is a highly integral part of acting for the camera and for theatre and there are lots of memory techniques that actors use to help them. Although every brain works differently, I thought it might be useful for me to share some of the things that I do and other tips and techniques that are suggested by experts.

You’ve been given a script and you’ve highlighted your lines. The first thing to do is to read the script all the way through. Even if you only have a small part or you’re only in it for a short amount of time, you need to be able to know the whole story and how your character fits into that plot. Who is your character in relation to other characters? Are some lines comedic or ironic due to other parts of the script? Reading it through should help you understand how you need to say your lines and how to characterise your role.

If your character appears throughout the show, reading the script like a novel to begin with – and not stopping to break down lines – is going to help you understand the story arc and the traits and motivations of your character.

For GCSE Drama, you have to perform two extracts from one play. By reading the script all the way through, I got to know how my character behaved in-between the scenes that I’m focusing on. It helped me to gage how my character develops through the play and what her relationship is like with other characters.

Attempting to learn lines can be a little daunting but my next step is generally this simple: reading my lines aloud. As I become familiar with the lines then, I try to look away from the script as much as I can. Repetition is key here and the more you go over them, the more they’ll become ingrained. When you’re reading your lines from the script, remember not to passively read without taking the words in. Always be actively engaging and trying to memorise the lines, not just going through the motions – that won’t get you anywhere.

Saying an individual line, then saying it without the script is a good way to memorise small sections too. A common way of doing this is with a scrap piece of paper – covering everything on the page except your line and the cue line, reading it over and over and then reciting the line without looking.

Block quote - You have to know your lines inside out and back to front.

There’s a tendency to think that rehearsing your lines too much will make your acting less realistic but actually, being any less than 100% certain of your lines is only going to make you break out of character.

Rehearsing with a partner

When you’re familiar enough with your part, you can get a friend or family member to test you on your lines by getting them to read your cue lines (the lines leading into your own). This should help you learn where your lines come in and the other person can tell you if you got the line wrong.

When you’re rehearsing, try and remember to act and emote, even if you're only practicing to get the lines in your head. It can’t hurt to play around with characterisation and expressions at these early stages. In actual fact, making emotional associations with the lines and attempting to express yourself vocally can help you to memorise your lines!

‘Memory palaces’ or ‘journeys’ and spatial memory techniques are sometimes suggested for learning lines too. This involves associating lines with different locations. It could be mental locations, for example, you could fix lines to specific mental journeys (eg. through your home, bedroom) or it could be real locations or actions that trigger the lines for you on the stage or set.

I experimented with spatial memorisation whilst trying to learn a particularly large section of speech from my script. I wrote each sentence or two on a post-it and put them in an ordered trail around the walls of my room. The idea is, that when it comes to acting this chunk of speech, I can visualise where each section is in my room and remember it.

One method I tried was using the voice notes on my phone to record myself saying my cue lines with adequate space in between to say my own lines. Then, I could just press play and rehearse without needing to rope in a partner. The disadvantages to this way are that there is no one there to tell you when you’ve got a line wrong and it’s hard to tell how much time to leave before saying the cue lines.

Some experts say writing your lines out by hand can help in the learning process, while taking a nap after learning a chunk of lines is another tip suggested. The information is said to shift to your long term memory as you sleep. Going on a walk and engaging your muscles in physical activity after learning is said to help for memorisation too.

Once you're off-script remember to keep practicing and maintain what you’ve learnt! Don’t expect to remember it a week later when you haven’t practiced in between. Keep rehearsing regularly.

That’s it for the tips and techniques. I hope you’ve found them useful. Good luck with your line-learning! 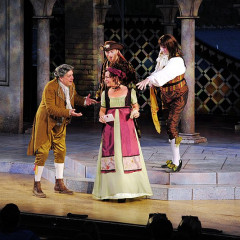 How to learn lines

This Summer, I was set the task of learning all of my lines for my GCSE Drama scripted performance. It got me thinking about my methods for learning lines and had me experimenting with some new techniques.