How SIX the musical breaks the bias and challenges the concept of female rivalry.

When I went to see SIX in the UK tour this January, I was blown away! It was one of the funniest, bold, and high energy that I have ever seen as musicals go. Created by Lucy Moss and Toby Marlow, the show is full of amazing music, vocals and dancing. It also retells the history of Henry VIII's six wives in a new and exciting way and lets their individual stories come to light.

SIX is a brilliant show which has recently been praised by Voice Mag's Hamish Gray in the Voice retrospects, which you can see here. It's a hilarious and uplifting musical but also poignant and powerful.

But why am I talking about it for International Women's Day?

Well, SIX is fundamentally a celebration of women. It celebrates women whose voices have historically been stifled due to gender disparity. SIX takes the light off Henry VIII and shines it on the Queens – who each have stories to tell in their own right.

SIX shows how they were not just the wives of a King or 'just one word in a stupid rhyme'. It's a chance to retell those stories with a new lens and focus, all the while relating it to modern life too. SIX is a reclamation of the wives' stories which have been skewed and unfairly represented over the years.

"The cleverest thing about a sensationally clever piece of work is the way it mocks the historians of the past".

For anyone that has seen it, you'll know that it's not the most historically accurate production. Still, that clever retelling of the story is what makes it fun, energetic and relatable for people today. A 16th-century pop group made up of Henry VIII's six wives – is not meant to be believable. It's meant to be silly and ridiculous whilst still maintaining an important message.

The main message of SIX is critical of a culture that creates rivalry between women – where women are comparing themselves and are competitive rather than supportive of one another. Possibly due to evolutionary psychology or internalised misogyny, this rivalry is recognised within our society, but SIX says that it doesn't have to be that way.

The premise is that the Queens are against each other in a bid to be the lead singer of their pop group. In the end, they come to the conclusion that they don't have to compete against each other, and they can all have an equal role in the band.

"The very idea that women can unconditionally support each other's success and exist as mutually empowered individuals upsets the patriarchal hegemony of society."

The Queens learn to support and celebrate each other, which confronts the culture formed in our society.

SIX is a great change from glorifying the concept of 'female rivalry', which 'is a tale as old as time, with literature, films and television often pitting women against one another for entertainment purposes' says Marie Claire.

SIX flips the script on this concept as the Queens realise that their competition is both hurtful and futile.

The object of their competition is actually who suffered most in life. SIX is enlightening on the suffering of women during the Tudor era, such as the need for women to marry or else feel ostracised by society, but this is not a reason to compete with each other. It is a reason to be there for each other and practise solidarity, as they have all faced the hardships of being a woman in an inherently sexist society.

The show is female-driven and totally empowering. The cast and musical ensemble are all women, which I loved! It was so refreshing and powerful to see that on stage.

"For the show's creators, having all women performers, including its onstage band, was non-negotiable."

It's a representation of women that we don't often see and provides role models for young musicians.

This year's theme for International Women's Day is #BreakTheBias. From the challenging of the unjust telling of history, the all-woman casting, and the powerful message it gives, SIX breaks biases and stereotypes from all sides. It really is a ground-breaking piece of musical theatre. 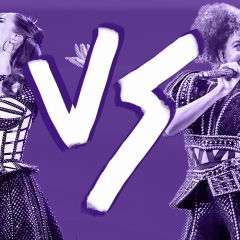 How SIX the musical breaks the bias and challenges the concept of female rivalry.