Cinderella is a fabulous film that brings a great soundtrack, laughs and wonderful dance numbers to the table. Its bright, colourful setting and costumes create an enchanting and exciting world. It’s a happy-ending, feel good film that’s perfect for families and children.

The all-star cast of Cinderella is wonderful. Camila Cabello plays the title role with a comic yet earnest characterisation. The likes of Idina Menzel as Vivian the stepmother, Nicholas Galitzine as Prince Robert and Billy Porter as Fab G gave engaging performances too.

I would liken Cinderella to the movie Ella Enchanted – a firm favourite of mine growing up. Both stories are derived from the same fairy-tale but have been given fresh new looks and well-known hits added to the soundtracks. Like Ella Enchanted, Cinderella has big dance numbers which are full of energy and musical positivity. Also, Cinderella is much like Moulin Rouge! in the way it incorporates popular cover songs to compliment the narrative. I like this aspect of the film because you get to hear songs you already know and love put into a story. In both films, you see multiple songs blended into one musical number, which adds to the dynamic and pace.

Also brilliant was the reimagining of town criers. What is typically considered an old-fashioned tradition has been given the modern treatment in the form of rap. Doc Brown and the musicians really bring that role to life in a unique way. This is representative of the rest of the film as well – an old-fashioned story retold in a new and captivating format. There have been so many adaptations and retellings of Cinderella so it was hard to think they could keep this one interesting but it is!

Female empowerment is at the forefront of the themes present in the film. Cinderella herself is a driven dressmaker who will not cast aside her ambitions for anything or anyone. In the male-dominated business world, she strives to make herself known and become successful in her field, despite her step mother and others attempting to push her down.

“To think that any girl, let alone you, would have the audacity to engage in matters of business, it's insane.” – Vivian, the stepmother.

Despite the sexist values of the town in general and the obstacles in her way, she sticks with her dreams and works hard to make them come true.

One criticism of the film would be that the comedic moments are a bit hit and miss. Often, the humour is spot-on but other lines that are obviously intended to be funny fall short. Due to both the awkward writing and flawed characterisation, some parts that are meant to be silly and fun end up – at times – quite cringe-worthy and irritating. Overall though, there are lots of funny moments that I enjoyed, and those minor blips didn’t detract too heavily from the rest of the film.

If you love musicals and fairy-tale magic this is the film for you! 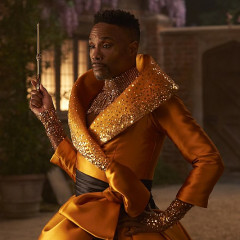