Something big was needed if things were going to change in my life. I needed something that would allow me to essentially walk away from everything, clean slate in a new place. I just didn't know what the something was. After a few days I had an epiphany, I knew what that something was. The hot news of the time was the multinational peacekeeping efforts in Bosnia, the terrible genocidal discoveries, and the efforts to restore normality.

This was big. This was something I could help with on a real level in some way, this was something I felt I wanted to do, and who knows with any luck I'd not have to go to Northern Ireland which was in between cease fires and in a politically precarious situation at the time.

My next free day I went to the RAF recruiting office to see how I joined. I'd fly away from my problems and get a new start and make a difference for someone else. Except, I wasn't flying anywhere. They were only offering jobs as a Steward - essentially the military's name for an in-flight attendant, and that really didn't appeal to me so off I walked away. My dream of a new start wasn't shattered, but it was a bit roughed up and frayed at the edges. By now I was certain it was time for something new, and this had the net effect of not improving how I felt about my situation.

Again, I had a bright idea, and next free day I went to the Royal Navy recruiting office. They really were recruiting – I'd seen the ads of the time saying they were recruiting on TV, I'd sail away from my problems! I asked how I joined and what jobs I could do, there were many choices of job offered to me. I settled on Medical Assistant which seemed to be a worthy occupation. Being born in the first half of the 1970's I remember the nightly news updates as a child from the Falkland's conflict, and remember seeing navy medics treating horrifically injured people this was what I would do with my life.

So, I set about going through the local first stages of recruitment, which saw me undergo a series of educational tests, filling in some forms and finally an interview with a naval officer. The end result of those steps was I wasn't sailing away from anything. They used a phrase which was something like 'not considered suitable to be a medic or for naval service' on the letter I received a few days later. This was something of a blow to me, nobody wanted me, even the navy thought I was worthless. I never did find out why, and have occasionally wondered since what was it I said or did that judged me unworthy.

It was my last chance time when I finally walked into the Army recruiting office. I sat in line with about half a dozen other young people waiting my turn to sit a test to see what if anything I was suitable for in the army, each coming out with an A4 sheet with anything from 2-3 items listed to about a third of a sheet of options. I presumed this must be a difficult test if some of the lads were only getting a few options.

I sat test on a computer called the BARB test, the better you did, the more trades became open to you. I came out with most of my A4 sheet filled with options of jobs. The recruiter took a pencil and ruler and crossed off a few jobs that required certain academic qualifications like the A levels I hadn't even considered trying for. But I still had my pick of most of the army's trades if I wanted. I selected the 3 options I was most interested in and had to go attend a selection test which was 2 days away from home, they gave me a train ticket and a list of things to bring. This was it, this was my escape starting to become real, and they were sending me away for 2 whole days, giving me a train ticket to go to the exotic sounding Army Training Regiment Litchfield.

Finally, my life was going in a general direction somewhere, I wasn't sure where, but this was more like it, I had a purpose. I attended the selection where we were given a few briefings, a medical, a fitness assessment, and an interview.

At the end of all this I was told while I was the kind of person they wanted, I was carrying too much weight, and I needed to get fitter, so at that point in time it wasn't possible to offer me a place in the army. 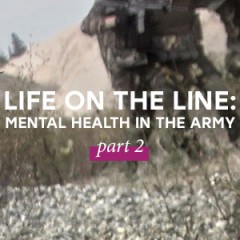 Life on the line: Mental health in the Army - Pt. 2