I left school aged 16 in 1991, thoroughly disenchanted with the education system. I wasn't by any means disruptive to the lessons, or actively not participating, but at age 15-16 studying works of classic literature held no interest to me, quadratic equations made no sense in the real world and studying endless combinations of protons and electrons wasn't doing it for me. My only real interests in school besides the weekly club playing Dungeons and Dragons was physics. I naturally absorbed the material, partly out of natural curiosity and partly owing to Mr Richards one of the few teachers who was able to spark interest in me.

When I left I'd attained reasonable, yet hardly stellar results in my GCSEs which I suspect was no great surprise to any of my teachers. The general message from most of my school reports was the same year after year – I was seen as being intelligent, but disinterested in the majority of lessons, so didn't really put in the effort to attain my full potential.

As a child I wasn't really the centre of anything, I wasn't the popular one, more the weird kid who turned up, had a select group of a few friends who were also probably seen as being the weird kids. Probably just a banding together against a common enemy. Even then I was fairly introvert and was fairly content with my own company – a trait which is still strongly ingrained in me today. I never attended the school discos or other social parts of being a young person in the late 1980s and early 1990s, at the time proms and fun at school were a thing we had only seen in John Hughes's fictional town of Shermer, Illinois.

The message at home was simple, if I wasn't going to continue studying, I was going to start work and contribute to the family, and so with the assistance of my parents, I found an apprenticeship as an electrician with a well-known company that claims to make exceedingly good pre-packaged cakes. I found I enjoyed the job, I was learning skills and had a knack for working in a practical skill based occupation. I also found I really liked access to free cake and consequently started to eat a lot – something I've had problems with at different points in my life since. I also liked earning enough money to start having a bit of independence. Again, I didn't have the large circle of friends and chose to spend my time alone, or just going out anywhere to be alone.

However, this was not to last. The early 1990s along with some great music, questionable fashion choices and Tamagotchi, also brought a recession. My factory was closed as a part of a restructuring and I was left as a part trained apprentice, and nobody wanted to take me on in the trade I was learning, it's not how it was done then.

I spent time drifting through random low paid jobs. Eventually I took a day off as sick, caught a train and went to a favourite place up in the hills. I needed somewhere to think and clear my head. I was feeling troubled with the way my life had ended up, there didn't seem an easy solution to my problems that I could figure out. There seemed to be no real hope to be had in my choices for ever getting out of the cycle. When I wasn't in work I just stayed in my bedroom, kept myself to myself, and often slept a lot. From what I'm told from my family I wasn't much fun to be around having hostile feelings towards those close to me. Yet I wasn't really able to articulate what was wrong in my life, because I didn't really understand what was wrong, it just felt like that was how life had to be and I had no choice in the matter. 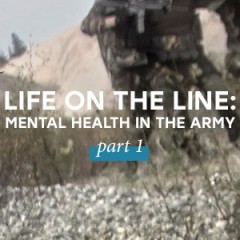 Life on the line: Mental health in the Army - Pt. 1