Dragons' Den returned to our screens on Thursday 5 Jan, so let's hear from the Dragon's themselves on the new series.

What a great way to start the new year with a brand new series of Dragons’ Den, featuring ambitious entrepreneurs hopeful to gain an investment in their business. In honour of the shows 20th series, here’s an exclusive Q&A with the five fiery dragons: Peter Jones, Deborah Meaden, Steven Bartlett, Sara Davies and Touker Suleyman to see how they are feeling about the shows return.

You are the longest serving dragon and have been a part of the series since the beginning. Do you have any stand out or favourite moments during your time on the show?

When I think of my favourite moments obviously I go back to Levi Roots and his Reggae Reggae sauce. It has been an outstanding success and it has been a joy to see his business grow and develop over the years. A major feature film telling Levi’s rags to riches story is now in development which is very exciting. But I also think back to Rachel Watkyn’s appearance in series 6 when she pitched the Tiny Box Company that has been a great success for Theo and myself.

When you filmed the first episode, did you think Dragons’ Den would get to 20 series?

I wasn’t sure it would get to series 2! But we underestimated the public’s enthusiasm for entrepreneurship. I really believe that Dragons’ Den is one of the reasons that we have seen an explosion in new businesses and young people believing that they can start their own venture and take control of their futures.

Can we expect more competitiveness from the Dragons this series?

“Always. Outside the studio we are all good friends but once the pitches start the competitive streak kicks in for all of us”.

Is now a really difficult time to start a business?

It’s never easy and obviously it’s a really tough market at the moment but adversity often leads to innovation, and if you can start up and survive now then you will thrive in the future.

This is your 18th series as a Dragon. Do you have a favourite or most memorable moment in the den?

This is the hardest question as there are so many. For the laughs, it was watching Duncan Bannatyne trying out the “gym chair” and collapsing in giggles with the Inventor. For the surprises, the yellow submarine which we all got to climb into, and for the crazy, the false fingernails for cats. For the fun, me driving a tank into the Den and scaring my fellow Dragons. For the music, listening to Tej Lalvani play the guitar...and I could go on and on…

Now in its 20th series, why do you think Dragons’ Den remains so popular?

Dragons’ Den is one of those rare programmes where families across all the generations can sit, watch, debate and have a view on, from great grandchildren to great grandparents and everyone in between. It also lifts the lid on the many faces of business. Seeing different people, businesses and ideas inspires so many to think of going into Business for themselves and in doing so literally changes lives.

Were you impressed by the standard of the pitches in the den this year?

This season is definitely a vintage one! So many creative, innovative and really well thought out ideas and of course all those brave and brilliant entrepreneurs bold enough to bring their business into the Den. Every year I think “surely I must have seen just about everything now” and then the lift doors open to reveal another cracking idea leaving me wondering why on earth nobody had thought of it before.

Can anyone start their own business?

Starting a business can be pretty simple but it is rarely easy. Having a great idea is the start but being able to deliver on that idea is what turns it into a business. Some people think they want to start their own business but when they realise the risks involved or the personal attention it takes it just doesn’t suit. It is also about timing…a great idea at the wrong time will fail, or starting a business at the wrong time for you personally can also lead to failure BUT and here is the big but…turn that on its head…have that great idea, work out how to deliver on it and launch at the right time and it can be the most rewarding, satisfying thing you will ever ever do.

Has the current economic climate affected you as an investor?

A lot of early stage businesses are finding it difficult to raise traditional funds in the current climate which means that for keen investors there are some really good opportunities. I think people also understand that having an “added value” investor can mean the difference between make or break. As an experienced investor you will have been through difficult times in the past and can both read the situation and steady nerves when needed. I am however, being very careful to understand the plan against the current climate because timing is crucial and for some it might just not be the right time.

What can you tell us about the new series?

The new series reflects the state of the world we live in; people are struggling, the tectonic plates underneath them have moved, but despite that there is a huge amount of entrepreneurial hope and optimism in the Den. As it relates to the Dragons, the temperature in the den is hotter than ever before - more fire, more fun and lots of businesses getting funded!

What kind of business do you look forward to seeing in the den?

I invest first and foremost in great entrepreneurs. In such an uncertain world, where things are changing at light-speed, backing resilient, agile, humble founders is the key to getting good returns.

Has the current economic climate made you a more cautious investor?

I've always been a cautious investor - but despite the dire economic backdrop, there are still amazing entrepreneurs, solving real problems through the medium of entrepreneurship - and I want to capitalise on that opportunity. I'm looking for businesses that have smart founders, solving real problems, that have the intelligence and financial fundamentals to navigate through these tumultuous times.

Do you have a dream business to invest in?

I want to invest in companies that have the potential to become the next global unicorns, companies going after large addressable markets with founders who have what it takes to get there.

20 series is a huge landmark for Dragons’ Den. Why do you think it remains so popular?

I think it's so popular because of the entrepreneurs. Even when you think you have seen it all, you haven't, something or someone amazing could walk through those lift doors at any moment!

What has being a Dragon taught you about business?

I think it's reminded me that when it comes to business, it's just business, it's not personal. For example, during my first series when Will from MakTok came in, it was such an emotional pitch and I definitely got caught up in the moment and in my heart I knew I wanted to offer him the money. Afterwards, Deborah told me she thought what I'd done was lovely but that I needed to toughen up! And she was right!

How are businesses fairing in the current economic climate?

I can only speak for my own personal experience of running my business and working with the ones in my portfolio but I have to say that it's a challenging time for businesses. It's tricky trying to market products effectively while dealing with rising costs and the fact that people aren’t spending as much but it’s important to be diverse and diversify your business and that's what we're trying to do.

What’s the key ingredient for a good pitch? And what’s the biggest faux-pas?

The biggest faux pas is not knowing your numbers! And the best ingredients are having a great product and being a great entrepreneur who has passion, knows their business and market inside out and is a hard worker.

This is your 8th series as a Dragon. What’s been your most memorable pitch?

A pitch given by Sam Jones, founder of Gener8 Ads. A near perfect example of talking us through the problem they were looking to solve, how they are were going to solve it and how we as investors were likely to make a return.

There’s always a lot of competition in the Den…can we expect more sparring amongst the Dragons this series?

Each of us has our own unique perspective, are strong characters and all have an appetite for good negotiation – the perfect recipe for a competitive environment… so yes!

Has the current economic climate made you a more cautious investor?

I am more wary of ventures that are still proving their business model and where profitability is still far off. Doubling down on investing in the quality of the entrepreneur or management; their resilience and ability to turn adversity into opportunity is key.

Do you have any advice for entrepreneurs coming onto the show?

Tell us your story, show us your passion for your business and clearly lay out your strategy for providing a return on investment.

Dragons’ Den Series 20 returned on BBC One on Thursday 5 January and will be on every Thursday at 8 PM. 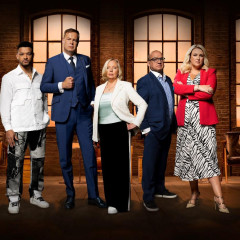 Exclusive interviews with the Dragons from Series 20 of Dragons’ Den

Dragons' Den returned to our screens on Thursday 5 Jan, so let's hear from the Dragon's themselves on the new series.