Maybe 2023 will be the peaceful, non-chaotic year we've all been longing for?

It seems like each year of the 2020s, we say, ‘I’m sure next year won’t be so chaotic’, and yet, here we are, with arguably the most action-packed year yet.

If you lived under a rock this year (or simply find the news too stressful), then here are the top ten breakdowns of events during this extraordinarily historic and record-breaking year.

Former Japanese Prime Minister was assassinated during a campaign speech

Former Japanese Prime Minister Shinzo Abe was assassinated on 08 July 2022, after being shot while giving a campaign speech on the street in central Japan.

Abe, 67, was the former Liberal Democratic Party leader and Japan’s longest-serving prime minister, holding office from 2006 to 2007 and again from 2012 to 2020 before resigning due to health. Since stepping down, he remained in the public eye and regularly appeared in the media to discuss current affairs.

It’s reported that doctors said the bullet that killed the former Japanese leader was “deep enough to reach his heart”, and a team of 20 medical professionals could not stop the bleeding.

England created history by winning their first major women’s tournament in a dramatic Euro 2022 final against old rivals and eight-time champions Germany at Wembley. It is England’s first major tournament success since the 1966 men’s World Cup. 87,192 people watched the final at Wembley—an historic turnout for a Euros game in men’s or women’s football.

Queen Elizabeth II praised the champions by stating: “You have all set an example that will be an inspiration for girls and women today, and for future generations.

The Three Lions lyrics finally rang true as football came home at the national stadium in front of the largest crowd in England women’s history.

June saw China experience the most prolonged and hottest heatwave in history, lasting 70+ days and reaching a record of 44.2°C (111.6°F). Consequently, half of China’s landmass is experiencing severe drought–disrupting crops, threatening livestock, and affecting power.

Australia scorched at 50.7 °C (123.3 °F) in January, but 2022’s highest temperature came from Death Valley climbed to 51 °C (123 °F). Although it is second to the highest record, it’s the first that the temperature has continued for two consecutive days.

Droupadi Murmu became India’s 15th President on 25 July 2022. Murmu is the first tribal woman to be elected as President while also earning the achievement as the youngest person to be elected into office at 64—a significant step toward equality.

The former teacher-turned-politician has provided many in India with hope after winning 64% of the electoral college's votes against her opposition, Yashwant Sinha’s share of 35.97%

On 15 November 2022, the earth’s population reached 8 billion. “The milestone is an occasion to celebrate diversity and advancements while considering humanity’s shared responsibility for the planet,” said United Nations Secretary-General António Guterres.

More than half of the world’s population lives in Asia. In particular, India and China, each with over 1.4 billion people, are the most populous countries today. However, this also comes as many countries face plummeting growth rates while world leaders struggle to address pressing global issues like climate change, food security, ageing populations and environmental destruction.

Similarly, this was announced during COP27, held from 6 November until 20 November 2022 in Sharm El Sheikh, Egypt. Interestingly, the UN climate conference has widely been regarded as the ‘failed’ COP. Perhaps this could prompt world leaders and leading emitters in the right direction: eight billion people means eight billion reasons to tackle the climate crisis.

As of 27 October 2022, the world’s former richest man (now second), Elon Musk, closed his $44 billion purchase of the social media service—launching Twitter into its new ‘Twitter 2.0’ era. In a bid to open up Twitter as a town public forum, Musk has declared it will advocate free speech, ultimately ‘benefiting the future of civilisation’.

Immediately after there was a mass firing of Twitter employees, including Twitter CEO Parag Agrawal and CFO Ned Segal. The CEO outlined plans to cut Twitter’s staffing from about 7,500 to around 2,000 employees, roughly a 75% decrease.

In a short time, there have been plenty of controversies—including replacing Twitter verification with a subscription-based Twitter blue; reinstating the likes of former US president Donald Trump, controversially outspoken psychologist Jordan Peterson, and Ye (Kayne) West— now banned again for anti-semitism. Musk’s latest scandal involves censoring and banning journalists, a move that deservedly received significant heat from the UN, US State Department and EU.

The European Commission Vice-President for Values and transparency warned Musk that Twitter could soon face sanctions under new EU regulations. Violations could result in hefty fines of up to 6% of global annual revenue, and repeat offences could even result in a Europe-wide operating ban. Although Musk has since reinstated the journalist’s account, it’s only a matter of time before the next controversy.

[Ed. note: The pace of lurching controversies at Twitter means this post could well be out of date by then. At the time of writing, Musk is currently polling whether or not he should stay on as CEO.]

After the Party Gate, a cost of living crisis, 9.1% inflation, and Covid-19 missteps, Boris Johnson’s leadership was turbulent. Yet, by some miracle, he survived his party’s no vote of confidence in June 2022. Yet, only weeks later, he was forced to resign following a string of 59 resignations in July 2022.

So, following a protracted Conservative Party leadership election, it fell to Liz Truss to fix these issues as Britain’s third female Prime Minister. However, the once-Liberal Democrat fell short, with a mini-budget that crashed the country’s currency and rattled financial markets. She subsequently fired her finance minister and closest political ally. GBP dropped to less than the USD, the Bank of England bailed out the UK government, and inflation reached 13.3%—the highest for more than 42 years.

After 44 days, Truss became the shortest-serving prime minister in British history. Then, Rishi Sunak stepped up as Prime Minister by default due to a lack of competition—equalling three prime ministers in just four months. Of the G7 (comprising the most advanced economies), the UK economy is the only member that hasn’t recovered since COVID-19.

In 1973, the US Supreme Court recognised a woman’s constitutional right to an abortion in Roe v. Wade, but on 24 June 2022, it was overruled.

The Supreme Court has ruled in favour of Mississippi’s ban on abortions after 15 weeks. In doing so, it has effectively ended the constitutional right to an abortion for millions of US women. 13 states have significantly restricted access to the procedure, and it's estimated that half of the states in the US are expected to introduce new restrictions or bans to abortions.

Many world leaders have voiced concerns and expressed outrage against this. Concerns have been raised regarding the safety of women who will resort to dangerous methods and the domino impact this could have globally for other countries considering banning abortion.

The passing of Queen Elizabeth II

On 8 September 2022, the UK entered a state of mourning over the passing of the dearly beloved Queen Elizabeth II at the age of 96. This was just after she celebrated her Platinum Jubilee after reigning for over 70 years—the UK’s longest-serving monarch in history.

And so, began the infamous queue to pay respects and see the Queen lie in state. Warnings to those who travelled from around the world included: “Entry to the queue has resumed. Expected queuing time is over 24 hours, and overnight temperatures will be cold.” Ambulance teams treated 435 members of the public along the route of the queue.

Although the British are known for queuing, this queue is the longest recorded in history.

On 24 February 2022, Russia invaded Ukraine in a major escalation of the Russo-Ukrainian War, which began in 2014. The chairman of the US Joint Chiefs of Staff, General Mark Milley, estimates that around 100,000 Russian and 100,000 Ukrainian soldiers have been killed or injured in the war in Ukraine. However, this war has been particularly messy due to its impact on civilians, with a forecast that 40,000 civilians have died after being caught up in the conflict. Many war crimes are believed to have been committed.

The impact of this war has had devastating effects on its European neighbours. European gas and electricity wholesale prices increased by 115% and 237% respectively—leading to fuel shortages for heating homes or refilling cars.

With threats of nuclear war and World War III hitting all-time highs in Google searches, it’s believed the impact of this conflict will be long-lasting. 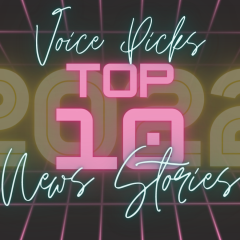 Maybe 2023 will be the peaceful, non-chaotic year we've all been longing for?