The UK Government have reversed almost all of their mini-budget plan, and the Chancellor has been fired.

Prime Minister Liz Truss fired Chancellor and Finance Minister Kwasi Kwarteng on Friday 14 October. Truss further said she would not block an increase on corporate tax, a reversal of the plan proposed last month to freeze corporation tax, and cut personal taxes. The change has come as a result of pressure from investors and global financial markets.

In a news conference from Downing Street, Truss vowed to raise the country’s corporate tax rate to 25% after promising the public last month she will not raise the tax rate, currently set at 19%.

Liz Truss stated, “It is clear that parts of our mini budget went further and faster than markets were expecting. We need to act now to reassure the markets.”

The UK government said any business earning less than £50,000 in profit will pay 19% in corporation tax. Anyone who earns more profit than this will pay 25% tax.

Business leaders have urged Truss to find ways to help companies deal with her planned increase on corporation tax. Company bosses have said businesses could be left worse than before. The CBI have warned the UK business investment as a share of gross domestic product will fall to the lowest level in the G7 members in 2023.

“Raising corporation tax in 2023 may help on the fiscal credibility front but if this move is made in isolation it could backfire. Currently, we have tax incentives for investment which are working but due to expire. So, the government should balance any rise on corporation tax with investment allowances, that way you help achieve both stability and investment.”

Liz Truss has said that the increase in corporate taxes will act as a “down payment” and help restore confidence. The reversal on corporate taxes had been expected, but Truss did not mention in the latest conference any further changes to her plan of reducing the basic income tax rate.

Downing Street has announced that Jeremy Hunt, who has previously held the posts of Health and Foreign Secretary, is the new Chancellor and Finance Minister for Liz Truss. He will be Britain’s fourth Finance Minister within four months, replacing the sacked Kwasi Kwarteng.

Newly elected Prime Minister Liz Truss has been in power for under six weeks. James Cleverly, the Foreign Secretary, felt compelled to warn his colleagues against removing Truss and said, “changing the leadership roles would be a disastrously bad idea.”

Kwarteng proposed a mini-budget three weeks ago, which promised tax cuts of £45 billion, and increased borrowing with the intention of boosting UK economic growth. This budget made the pound and government bonds crash, and raised fears of further inflation when prices are already rising at their highest rate. Mortgage rates also soared after the budget was announced.

The Bank of England warned of a serious risk to UK financial stability and announced three interventions to calm a bond market meltdown.

Jeremy Hunt, Chancellor of the Exchequer, will set out the UK government’s medium-term fiscal plan on 31 October.

The UK Government has said the reverse and cancellation of freezing corporation tax at 19% to an increase of 25% is set to bring economic growth to Great Britain. 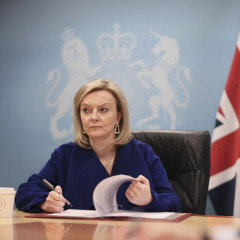 The UK Government have reversed almost all of their mini-budget plan, and the Chancellor has been fired.