A new series that issues judgements against the best and worst of our society from the week’s news.

Welcome to Voice Verdicts, where we take a look at this week’s news and decide who is worthy of praise and who deserves our derision. This week we have spaceman Jeff Bezos and the commendable MP Dawn Butler.

This week Labour MP Dawn Butler was ordered to leave the House of Commons chamber after she refused to withdraw accusations that Prime Minister Boris Johnson is a liar. Butler stated that Johnson has misled the House and cited the PM’s past statements on economic growth, nurses’ bursaries and investment in the NHS. This apparently contradicts official rules created in 1844 in the Commons that MPs are not allowed to accuse other MPs of being drunk or lying. Butler addressed this rule, stating “it's funny that we get in trouble in this place for calling out the lie, rather than the person lying”.

Once again, Parliament has proved its inaccessibility to those who don’t conform to its old-fashioned elitism, and because of this it is twice as difficult for a woman of colour like Butler to do her job as an elected official and member of the opposition. Only last week, MP for Coventry South Zarah Sultana was similarly admonished and tone-policed in Parliament for highlighting both Home Secretary Priti Patel and Boris Johnson’s racist comments. If it’s not a white, well-to-do MP speaking, the Tories aren’t interested, and there is a blatant pattern of Parliamentary prejudice against MPs of colour.

Not only is this multi-billionaire in the process of monopolising Earth, he’s now setting his dollar-signed eyes onto space. Yes, this week the founder of Amazon jetted off in a phallic-shaped rocket that did a 12 minute suborbital trip, marking the beginning of Bezos’s plans to commercialise space for those few earthlings who can afford it. To top off this hellish dystopian scene, Bezos decided to thank “every Amazon employee and every Amazon customer, because you guys paid for all this.”

Voice Magazine has reported extensively on Amazon’s exploitation of its workers, so for Bezos and his $205,600,000,000 to thank his underpaid and overworked employees for his little joyride is in poor taste to say the least. Though what does a 57 year old who wears a cowboy hat to fly into space really know about taste? One can only hope that this billionaire space race between Bezos, Richard Branson and Elon Musk just boils down to the boredom of the unfathomably wealthy, and doesn’t result in the rich humans laughing at the rest of us from their rockets while we deal with the fiery oceans and deadly floods that their companies have contributed to.

Header Image Credit: "Jeff Bezos - Caricature" by DonkeyHotey is licensed under CC BY 2.0 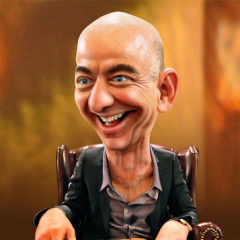 A new series that issues judgements against the best and worst of our society from the week’s news.