The move comes as part of the trade union’s ‘Action on Amazon’ campaign, which seeks to challenge the ‘working practices championed by Amazon’.

Trade union Unite the Union has called on Amazon to allow employees based in the UK and Ireland to talk to and join unions “without fear”.

The trade union has sent a letter to Amazon CEO Jeff Bezos, in which Unite executive officer Sharon Graham wrote: ‘Although we do have members in Amazon, workers in your company are not currently free to join a union without fear and without obstruction and propaganda being deployed against them’. The letter goes on to implore Bezos to sign and abide by a declaration that would ensure ‘British and Irish workers the freedom to talk with and join unions without fear of retribution’.

This comes after US-based Amazon employees in Alabama voted against forming the nation’s first unionised Amazon warehouse. In a blog post published in the wake of the vote, the e-commerce focused company remarked that ‘Amazon didn’t win—our employees made the choice to vote against joining a union’. However, the Retail, Wholesale and Department Store Union, which pushed for the Alabama warehouse vote, has since claimed that Amazon illegally interfered with the vote in addition to running an anti-union campaign based on fearmongering to intimidate workers. Amazon have denied this, though the company did hire anti-union consultants prior to the vote taking place.

Unite have also highlighted Amazon posting job adverts to recruit intelligence analysts who would track labour ‘organising threats’ in the USA in September 2020, though the adverts were later withdrawn.

Amazon was well-positioned to benefit from the coronavirus pandemic in 2020, which shut high street stores for most of the year. In their fourth quarter financial results report, Amazon reported a net income of $21.3 billion (£15.3 billion) in 2020, up from $11.6 billion (£8.3 billion) in 2019. Despite this, the company was subject to scrutiny over allegations of poor working conditions for employees, with strikes occurring at warehouses in Italy, Germany and the USA.

Unite has also set up a hotline for Amazon employees to report workplace practices and the trade union has established an overarching ‘Action on Amazon’ campaign to challenge ‘the working practices championed by Amazon’.

To read the letter sent to Jeff Bezos by Sharon Graham, click here. 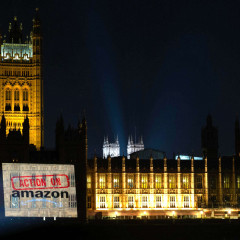 The move comes as part of the trade union’s ‘Action on Amazon’ campaign, which seeks to challenge the ‘working practices championed by Amazon’.