The entertainment business is such a huge part of our culture and society. Even with Covid forcing cinemas to close, festivals coming to a halt, and press tours having to be done remotely, the film industry is still worth billions.

But with power comes great responsibility, and the film industry has plenty of power to do plenty of damage to the planet. According to BAFTA, the production of just one hour of TV content creates 13 tonnes of carbon dioxide.

The Screen New Deal report, which is a green game plan developed by the BFI and BAFTA, states that the film industry intends to achieve a zero net target by 2050. But is this possible?

It’s one thing offering a vegan menu at the 2020 Oscars, or carrying a reusable water bottle around on set – it’s a whole bigger, trickier challenge to make a billion-dollar industry carbon neutral within a couple of decades.

But when there’s a will, there’s a way. And these are some of the ways in which the film industry is edging towards a greener future.

Covid-19 has forced many films to operate on a smaller scale. With travel restrictions in place worldwide, many projects have been carried out on a more local level, with less air miles involved.

Remote auditions have also become the norm during this pandemic. While this can certainly be challenging at times, it does show how long distance travel isn’t always necessary in today’s interconnected world.

Whittling down the waste

Film sets produce a lot of waste. Once a film is wrapped up, you’re sure to be left with a mountain of costumes, props, and other equipment that may never be used again.

The Screen New Deal report found that, on average, each film produces enough waste to weigh the same as 313.5 blue whales. Isn’t that crazy to think about? Surely, there’s ways to bring this figure down.

Using second-hand props from previous film projects, or building on top of an existing film set rather than starting a new one from scratch, are great ways to bring a film’s carbon footprint down. Plus, this often saves money and time too.

Sony donates 90% of their props to charity after filming. Rather than letting them go to landfill, this seems to be a logical thing to do, which further helps to promote films by creating some good publicity. So really, it’s a win, win.

Making a film can be extremely expensive. However, costs can be cut – particularly for new filmmakers with a small budget – by borrowing or renting equipment.

Websites like Fat Llama, or even utilising social media, can give people the opportunity to get their hands on flashy cameras and fancy recording equipment, and doing so can dramatically reduce a film’s carbon footprint. If one camera is being passed around multiple film projects, this means much less equipment needs to be in circulation, and things are less likely to be wasted.

How much food does it take to feed the average film crew? Some sets have hundreds of people working long days – that’s a lot of mouths to feed, but also, potentially a lot of food to waste.

More and more movies are tackling this by encouraging staff to take home leftovers, and installing compost bins on set. Meanwhile, productions such as Jurassic World donated their leftovers to food banks.

Of course, recycling a plastic bottle here or using a reusable straw there are all great habits to adopt, but in the larger scheme of things, sustainability needs to be done on a far bigger scale.

As a result, many films have started introducing green departments on set, who can offer advice and manage plans to make film sets more sustainable.

This is where organisations like Earth Angel come in. They offer a range of services which aim to lower a movie’s carbon footprint – and save money too! They claim to have saved productions $1.2 million by implementing greener, more efficient tactics on set.

Earth Angel has worked on a wide range of movies and TV shows, such as Black Panther, Okja, Orange is the New Black, and The Amazing Spider Man 2.

In fact, when The Amazing Spider Man 2 was released back in 2014, it was massively praised for being a carbon neutral film. From recycling textiles, to sorting through food waste, to giving out prizes to the greenest crew members each week, this movie certainly set the bar for sustainable filmmaking. They even had a social media campaign called eco spidey which documented their eco-friendly efforts. Perhaps more films should be doing this – not only is it a simple way to gain good publicity, but it openly sets an example and shows others what is really possible.

To keep things on track, many production companies and key organisations within the film industry have published their environmental goals and targets. BFI, for instance, are aiming to reduce their carbon footprint every year. They also have a zero to landfill policy. On the other hand, Netflix have rather boldly pledged to wipe their carbon footprint by the end of next year. That’s not that far away.

It’s great to see so many key players in the film industry being so ambitious. But should we be concerned? Perhaps they’re being unrealistic? Sustainability doesn’t happen overnight. It’s not a phase – it’s a culture shift, which takes time and effort to achieve. But then again, how much time do we have left? 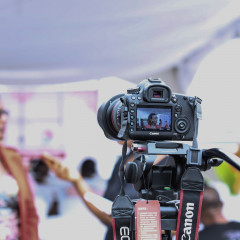