As cinemas finally reopen we’ve picked the best post-lockdown offerings. Get your snacks, an iconic Tango Ice Blast and choose which film you will be seeing this season.

The 101 Dalmatians  prequel and Cruella De Vil origin story follows the iconic villain in Seventies London. Cruella, played by an “eccentric, bold and hilarious” Emma Stone, combines the innovation of an aspiring fashion designer and the consistent drive to achieve her dreams when life is intent on ensuring that never comes true. This film is being compared to the iconic Devils Wears Prada, and stars Joel Fry as Cruella’s other henchman, Emma Thompson as the Baroness, Emily Beecham as Catherine, Jamie Demetriou as Gerald and Mark Strong as John the Valet. The trailer is wicked, sublime everything a villainess should be.

Cruella will be released on 28 May.

An adaptation of the long-running video game series of the same name, Mortal Kombat marks a return to the silver screen for the first time since 1997’s Mortal Kombat: Annihilation, which was largely considered to be a critical and commercial flop. With Earthrealm facing the prospect of being conquered by Outworld if it loses the titular tournament, the film looks to focus on the action-packed sequences the video game is known for. Iconic characters including Scorpion (Hiroyuki Sanada), Sub-Zero (Joe Taslim), Liu Kang (Ludi Lin) and Raiden (Tadanobu Asano) are set to feature in the adaptation. The most successful launch item for streaming platform HBO Max, Mortal Kombat is sure to tell cinemagoers one thing - ‘Get over here!’

Raya and the Last Dragon

A groundbreaking animation for Disney, it’s worth going to see Raya and the Last Dragon in the cinema before you can watch it for free with a Disney+ subscription on 4 June. Set in the fantasy world of Kumandra, the film tells the story of a fight against evil spirits that only the warrior princess Raya and her dragon can stop. It will almost certainly become a modern classic for Disney as the company’s first animated feature to represent SouthEast Asia.

Raya and the Last Dragon will be released on 18 May.

A pre-summer blockbuster that will aim to make full use of the spectacle and awe that is evoked by the cinema, Godzilla vs. Kong will certainly make the return of the silver screen more memorable. Continuing production company Legendary’s MonsterVerse, the film will see the two eponymous behemoths go head to head, and features a solid cast including Millie Bobby Brown (Stranger Things, Enola Holmes) and Alexander Skarsgård (The Legend of Tarzan). Initially released on streaming platform HBO Max earlier this year, Godzilla vs. Kong will be screened exclusively in Cineworld branches in the UK as part of a deal with distributor Warner Bros.

Godzilla vs Kong is available in cinemas now.

Black Widow takes center stage in the 24th MCU film, with a highly anticipated depiction of the character's cryptic past, “her secrets and her legacy”. Scarlett Johansson returns as the former FSB agent after the events of Captain America: Civil War in which she is forced to survive. If you are a true fan of MCU it is a film that cannot be missed as the action looks first class, the story is somewhat unknown and the timing is perfect as we patiently wait for our next fix of one of the highest grossing franchises.

Black Widow is to be released on 9 July.

Almost 20 years after the release of Spirit: Stallion of the Cimarron this equine adventure is back to grace our cinema screens. This spin-off is sure to provide some much needed nostalgia to older audiences while also introducing a whole new generation of cinemagoers to Dreamworks’ animated vision of the American West. With big Hollywood names such as Jake Gyllenhaal and Julianne Moore voicing the characters, this spin-off is one to watch.

Spirit Untamed will be released on 30 June.

The fifth Bond film to star Daniel Craig as the MI6 spy, No Time to Die has endured a troubled release. The title was originally scheduled to be released during 2020, but the coronavirus pandemic forced multiple reschedules. Now screening on 30 September 2021, Daniel Craig’s Bond will be brought out of retirement to face Lyutsifer Safin, played by Rami Malek (Mr. Robot, Bohemian Rhapsody). Directed by Cary Joji Fukunaga (Beasts of No Nation, True Detective), No Time to Die will be the final time that Craig portrays James Bond.

No Time to Die will be released on 30 September.

Based on the non-fiction book of the same name written by Jessica Bruder, Nomadland stars acclaimed actress Frances McDormand (Fargo, Burn After Reading, Three Billboards Outside Ebbing, Missouri) as Fern, a vandweller in America who decides to lead a nomadic life following the death of her husband. Directed by Chloé Zhao, Nomadland has received numerous accolades, including several Academy Awards, Golden Globes and BAFTAs. The drama was considered by many critics to be one of the best films of 2020, receiving praise for its cinematography, performances and direction, with Zhao becoming the first woman of colour to win the Oscar for Best Director.

Nomadland is available in cinemas now.

Marvel Studios’ Eternals feature a new group of Superheroes, an immortal alien race created by Celestials who have secretly lived on Earth for over 7,000 years. They reunite to protect humanity from their evil counterparts, the Deviants. The movie is directed by Chloé Zhao, who just won a pair of Oscars for her film Nomadland, and has assembled an incredible cast including Angelina Jolie, Kit Harington and Kumail Nanjiani. Eternals is another extension of the Marvel cinematic universe that will provide us with unfiltered action throughout the year.

The Eternals will be released on 5 November.

The sequel to the critically acclaimed 2018 horror film A Quiet Place, there’s high expectations for this release. Once again written and directed by John Krasinski (who you will know as Jim Halpert from The Office US), the audience follows a family that has to stay silent to survive as they navigate a post-apocalyptic world. The first film surprised critics with its emotional depictions of parenthood and thoughtful representations of deafness. Hopefully this followup film will retain the cleverly crafted balance of heartfelt horror.

A Quiet Place Part II will be released on 28 May.

What are you planning to see now that cinemas have reopened? If you have any suggestions or films you think we have left out feel free to comment down below. 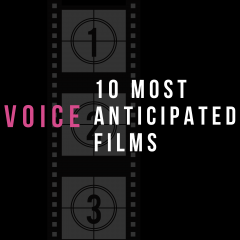 Our 10 most anticipated films as we come out of lockdown

As cinemas finally reopen we’ve picked the best post-lockdown offerings. Get your snacks, an iconic Tango Ice Blast and choose which film you will be seeing this season.