Recommendations for diversifying your reading with my favourite literary works from various parts of Asia.

I first discovered my love for Asian literature after finishing my degree in English Literature, which was predictably dominated by white, male and European authors. I now almost exclusively read Asian authors and translated fiction set in countries like Japan, China, South Korea, and Afghanistan. If you want to do the same but don’t know where to begin, these are my recommendations for uncovering the literary beauty that the continent has to offer.

This was one of the first works of translated literature I read. Murakami is arguably one of the most famous and prolific contemporary Japanese writers, with over 25 books and short story collections to his name. His work is known for its dreamy quality and focus on magical realism, with recurrent themes such as loneliness, music, family dynamics and mental health.

Norwegian Wood is one of Murakami’s less abstract novels, meaning it is a good introduction to his work without being thrown into the deep end of his more confusing narratives. The first-person narrative follows Toru Watanabe as he navigates college life in Tokyo and comes to terms with the losses and first-loves he experiences in his youth. The novel is quietly affecting and was certainly formative for me in my discovery of Asian literature.

Korean-American author Min Jin Lee has only two novels to her name, but both have made a significant impact. Her works focus on the experiences of Korean immigrants and generational divides.

Pachinko has made the list of my favourite books of all time. This multi-generational tale follows a Korean family who, following Japan’s colonisation of Korea, move to Japan and struggle against pervasive discrimination, with tragic consequences.

One of my favourite things about reading is the unexpected information you learn along the way, and Pachinko is a stand-out example of this for me. I can now say I have some knowledge of Japan's colonisation of Korea and how this led to the Korean War and the divide of North and South. I might otherwise have never researched this myself, and I got to learn about it against a backdrop of moving fiction.

One of the more well-known authors on this list, Khaled Hosseini is an Afghan-American author. His novel The Kite Runner is his most famous work, but it is closely followed by A Thousand Splendid Suns, which is my favourite of the two.

A Thousand Splendid Suns charts the journeys of Mariam and Laila, who are both forcibly married off to the same abusive husband. This is far from an easy read as Hosseini doesn’t shy away from detailed accounts of domestic violence alongside the tragedies of war. It is impossible not to become emotionally invested in the characters as you read Hosseini’s work, but also in the wider setting of Afghanistan, as he makes sure to illustrate the beauty of a country that is often only associated with war and destruction in the modern Western consciousness.

If you enjoy non-fiction more than fiction, then Wild Swans is for you. Another book I can credit as having expanded my historical understanding of Asia, this multi-generational biography delves into Chang’s family’s experiences of living in Communist China over the course of a century. We see her grandmother escape from living the life of a concubine, to her mother becoming a high-ranking official under Chairman Mao’s leadership, to her own struggles with undoing the brainwashing she underwent growing up in the regime before moving to the West.

At times it is hard to believe that these experiences aren’t a work of fiction and that they all happened across three generations within the same family. Again, it is another difficult read, particularly in the section covering the Cultural Revolution, which saw the mass torture and starvation of Chinese citizens. It is still a valuable and fascinating read for anyone who is interested in unravelling the history behind the now global superpower of China.

A slightly different suggestion here but still worthy of this list, Takami’s Battle Royale is a highly influential Japanese work. Plot wise, Battle Royale is similar to The Hunger Games trilogy by Suzanne Collins, except Takami did it first, and it features school kids made to fight each other to the death at the order of an evil Japanese government. This is a classic example of the substantial influence that Asian literature can have on Western works that often goes uncredited and subsequently we hear nothing of it.

If you don’t enjoy pulp fiction and gory violence then I would probably give Battle Royale a miss. However, the story is undeniably exciting and unapologetically horrific. It has since been adapted into a manga, a film in 2000, and inspired a whole genre of video games.

These suggestions are only a snapshot of the varied and worthy works of literature that the continent of Asia has for readers. There’s something for everyone in terms of genre, narrative and style, and it can open up a whole  world both literally and figuratively.

If you're interested in exploring literature from around the world, why not check out 'A focus on South American literature'. 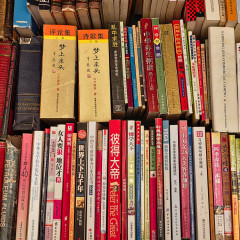 A focus on Asian literature

Recommendations for diversifying your reading with my favourite literary works from various parts of Asia.