I am a big lover of true crime. Whether it’s a new Netflix series, the latest episode of a crime podcast, or a YouTube video digging deeper into an unsolved mystery, I hate to say it, but I’m addicted.

It turns out I’m not the only one. In the UK alone, an average of 6.5 million of us listen to podcasts each week. And the true crime genre sits comfortably as one of the most popular categories.

Some of today’s highest earning podcasts revolve around true crime. My Favourite Murder, an American bi-weekly comedy crime podcast, generated a whopping $15 million between 2019 and 2020, which makes it the second-highest earning podcast out there, according to Forbes. Meanwhile Serial, an investigative crime series, became the fastest podcast to hit 5 million streams and downloads in iTunes’ history. So, in other words, true crime is a massively popular, rapidly growing genre.

But why do we love it so much?

Perhaps it’s the twists and turns that you enjoy. Watching a mystery unfold in front of you. Maybe it’s the excitement of guessing who the killer is. Or maybe you’re just keen to help spread awareness of unsolved crimes.

There are cases out there that have been cracked by true crime fans (or at least, they’ve helped). Unsolved Mysteries, a true crime show massively popular on Netflix, says that viewers have helped to solve over 260 of their cases.

But some people have taken things one step further. In 2019, New York’s police department launched its own podcast, Break in the Case, to encourage people to come forward with information regarding crimes in the local area.

So, is that it then? Do we enjoy true crime because we want to feel involved? We want to help? Perhaps we dream of being the one to offer the final puzzle piece.

In the UK, men are more likely to commit crimes than women. 74% of UK criminals are said to be male, and the more violent a crime is, the more likely it is to be committed by a man. In fact, this is a general trend all over the world.

Interestingly though, more women watch crime documentaries, listen to crime podcasts, and read crime books compared to men. And these figures are rising every day: the number of women listening to true crime reportedly grew by 16% between 2018 and 2019. So, what’s that all about?

Amanda Vicary, a psychology professor at Illinois Wesleyan University, has heavily researched women’s obsession with true crime. She explained in an interview with Spotify, “women, compared to men, were more likely to be drawn to true crime stories in which they knew they were going to learn about the psychology behind the killer.”

Whether we do it intentionally, or completely subconsciously, it seems like many of us love true crime because of what they can learn from it.

Preparing for the worst

I wouldn’t say watching some docuseries about a brutal, violent murder sounds particularly fun. And yet so many of us can’t get enough of the stuff.

Is it curiosity, as we wonder how these people reached the point of committing some of the worst atrocities possible? Or are we learning, and preparing ourselves in case we fall victim next? Maybe that’s one of the reasons why so many women are avid fans of true crime – it’s an attempt to protect ourselves, and be one step ahead.

But that doesn’t mean crime victims are always women. In fact, when it comes to crimes like murder and robbery, the victim is significantly more likely to be male. But equally, women are far more likely to experience stalking or sexual assault.

Figures aside though, we can’t ignore how our society often stereotypes women as the defenceless ‘damsels in distress’. We only need to look at recent cases, like Sarah Everand’s murder, to understand why women can often feel vulnerable, especially at night.

Rachel Fairburn, co-host of the All Killa No Filla comedy crime podcast, told the BBC: “I think women love true crime because pretty much from the time that we’re very small, we’re told to be careful, look after ourselves, watch out for bad people, make sure we get home safely”.

“I think safety is always at the forefront of our minds and when we read about serial killers, murderers, true crime cases, I think there’s always an element of self-preservation there.”

But where do we draw the line?

While true crime can offer education, awareness, and even help to deliver justice, the growth of this genre does have its downsides too.

Many crime documentaries have been criticised for their ‘tunnel-visioned’ coverage of cases. Sometimes, we don’t know all the facts and information, and sometimes it can be really easy to forget that, and fall down a rabbit hole.

An example of this happening was in Netflix’s recent series, Crime Scene: The Vanishing at the Cecil Hotel, which centred around the well-known, tragic death of college student Elisa Lam, whose body was found in the hotel’s water tank. This case is crawling with conspiracy theories, from people believing that Elisa was a test subject for tuberculosis, to others convinced that she managed to enter another dimension.

Whatever you believe is up to you. Your opinion is your own. But we do have to remember that these true stories centre around real people, with real families. Sometimes, we must ask ourselves: are we pursuing these theories because it’s the right thing to do – are we genuinely working towards justice – or are we simply sensationalising a dreadful story for entertainment?

That isn’t to say that unconventional theories aren’t ever true. Of course, there’s cover-ups, red herrings, and all sorts of trickery out there. But we must acknowledge that once a theory is out there, it has consequences. It might lead to a case being cracked, or it might ruin an innocent person’s life.

Netflix’s Cecil Hotel series showed how Mexican death metal singer, Morbid, was accused of killing Elisa Lam, despite not even being in the same country as her at the time of her death. Many YouTubers, bloggers, and self-proclaimed sleuths openly believed he was the killer, due to his dark music content and a video posted on his YouTube channel, in which he was staying at the Cecil Hotel (years before Lamb’s death, bear in mind). While he has solid evidence to separate him from Lam’s death, the media continued to hound him to the point where he attempted to take his life.

Do you think this is an exception? How many people out there have been wrongly accused by crime podcasts, documentaries, and YouTube videos of being somebody’s killer because this narrative was more exciting than the truth?

It may not be every podcaster, filmmaker, or blogger out there guilty of this. In fact, I do like to believe that a majority of true-crimers have genuinely good intentions. They help to spread awareness and seek justice on behalf of cases that could easily become forgotten if it wasn’t for them. But while plenty of good is being done, a couple of bad eggs can make the whole bunch look rotten. We must stop this genre from simply becoming a platform where views, money, and sensationalised tales are favoured over ethics, trauma, and the treatment of others.

Recent crime series have been criticised for showing overly graphic, triggering content. Don’t f*ck with cats and Night Stalker – both of which are crime docuseries available on Netflix – had viewers complaining that the filmmakers had gone “too far” with unnecessarily grotesque scenes being unexpectedly shown throughout the series.

One viewer of Night Stalker tweeted: “No need for them to include the victim crime scene photos ... it's not necessary”. It’s one thing following a plot – it’s another thing to include graphic, violent content that doesn’t need to be there, simply to raise the ‘gore factor’.

A spotlight on the killers

There is debate that true crime can often glamorise killers, and favours their stories rather than giving the victims or their families much coverage – or respect. The killer’s point of view is more interesting. More shocking. More gruesome. And worth more money.

Imagine if your loved one was the victim of a brutal crime, and without your permission (or knowledge, in many cases), a series is released describing their death in detail. This really pushes ethical boundaries.

Mindy Pendleton, whose stepson Robert Mast was murdered by his girlfriend in 2015, pleaded with Netflix not to go through with their documentary I am a killer, in which they interviewed Mast’s murderer.

Pendleton spoke to Time magazine about how these experiences re-traumatise victims’ families. Netflix justified their documentary stating that it was made to “encourage social discourse” regarding violent crime, and they had no intentions of sensationalising her stepson’s murder, or to advocate for convicted criminals.

But Pendleton said: “I really don’t feel that with the name I am a killer, you will be viewed by an audience wanting to seek social change and understand violence crime … they are just looking for gruesome details of murders.”

Ned Parker, the executive producer of I am a killer, received messages from a number of Mast’s friends and family members telling him not to go through with the documentary. He described this as the “moral dilemma” of his career, despite continuing with the project anyway.

However, sometimes we’re in the opposite situation, where a victim’s family does want their loved one’s story out in the open. They’re the ones who approach filmmakers or a crime podcast, in an attempt to raise awareness, seek justice, and hopefully find closure.

Crime Junkie, which is a popular American crime podcast, has covered many forgotten stories. They’ve focussed on missing people who the media has lost interest in, ethnic minorities who have been unfairly discriminated during their case, and victims of widespread, yet hugely taboo issues, like domestic abuse and human trafficking.

Having said that, Crime Junkie have also been under fire recently after being accused of plagiarising other people’s work. Maybe the waters are muddied after all...

True crime is likely to not only remain popular, but to continue growing. As more cases are solved, and new stories are revealed, and new information is leaked, there will always be content out there. Besides, the true crime genre is worth too much money to be going anywhere soon. And it digs into our curiosities in a way that even fictional crime stories never could.

But next time you’re listening to podcast on your way to work, or you’re snuggled down for the evening with a blanket and Netflix’s new unsolved murder case, it is worth thinking outside the box. What was the cost of this story? 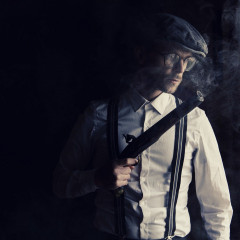 What's our obsession with true crime?