Allie Marie Hunter is a passionate and talented Country singer and songwriter, who has most recently released her debut single ‘Never Beat Again’. Allie introduces first listeners with a beautifully assembled single that interlinks mellow and gentle vocals, placed on top of a subtle acoustic guitar melody.

The debut single ‘Never Beat Again’ was a song written in just 5 minutes after Allie fell in love with the instrumental. A story that poured out of her without hesitation. Although it’s not a personally true story, Allie felt inspired after years of conversations with military friends in the USA, and military family members in the UK, as well as many visits to war memorials, and wanted to pay tribute to all the fallen heroes, both here and with her friends & family in America.

When singing the track to the production manager (Hank) one evening at one of their recording sessions, he told Allie, without a flicker, that this was ‘her’  single. It is full of raw emotions & honesty, and I guess it just resonates with so many people, and that’s what Allie wants all of her music to do.

“Never Beat Again'' was one of those stories that came flooding over me and the lyrics just fell on to the page. I wanted to reflect the message that true love remains even after someone has gone and pay tribute to all our fallen heroes. The music video had to paint a beautiful visual to support the song and I wanted it to focus on the beauty of nature, even amidst heartbreak and loss.” - Allie Marie Hunter

Allie's song writing strikes a chord & evokes a strong kinship in the heart of country music. With a focus on storytelling with tales straight from her heart, she calls upon the moments that have shaped her life so far to form the poetic narratives in her music.

She grew up in a creative family surrounded by singers, musicians, actors & dancers, and was deeply grounded in the classics of country music from a young age.

No stranger to the stage, Allie performed in many leading-lady roles in musical theatre groups from the tender age of 6, before going on to gig across the UK from the age of 15. She then attended drama school, wrote a science-fiction novel, scripted a collection of short films and plays - one of which she toured across London in 2018, before embarking on her exciting journey with FH Block at the renowned Ealing Studios, to create her debut EP "Gone Baby Gone".

"I am so grateful to the team at FH Block that believed in me and my writing, to help give me the chance to show the world my music. My acting and dancing always gave me so much joy, but being able to speak my truth through my song writing is a feeling I'll never be able to put into words. Country music has always felt like home to me; a place that brings people together, and I want my music to be a safe place that hopefully so many people can relate to."- Allie Marie Hunter

Allie's down-to-earth attitude has helped her carve out her emotionally honest and sensitive sound that she is now finally ready to share with the world, in the hope of finding her own place in Country music, and ultimately, in Nashville. 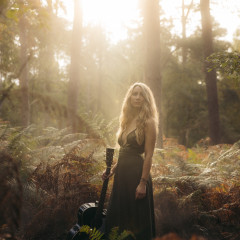