Calum Foad is back and better than ever before. His upcoming offering ‘High’ embellishes his Pop culture charisma and musical identity. The track surfaces a blend of them feel good summer beats, grasping at a sense of euphoria and excitement. Calum uses vintage synthesizer styles to create an elaborate listening experience.

“High” is the first of a trilogy of new songs - along with “Chemical “and “Make You Cry” - that showcase uninhibited, autobiographical musings of Calum’s relationships with career, partners and vices, alluding more heavily than before to classic 80s synth-pop.

Calum Foad is a 25-year old synth-pop artist,  hailing from Reading, who has been singing and playing guitar since childhood. Calum quickly developed industry support, writing and recording on both sides of the Atlantic with producers such as Dan Weller (Enter Shikari, Nina Nesbitt) and grammy nominated Marc McClusky (Weezer, Motion City Soundtrack).

Calum grew into his teens listening to the guitar driven sounds of Green Day, My Chemical Romance and Good Charlotte. Offset by his affinity for the nostalgic ethers of the 80s. Idiosyncratic, upbeat-yet-evocative pop sound is testament to an artist comfortable in his own skin.

2017 saw the birth of Calum’s single ‘You & I’ and his genre mixing sound resonated with an audience  leading to his first appearance on ITV’s ‘This Morning’. A year-long, national school tour ensued before his second single release “Rollercoaster” in 2018 through US label group, AWAL. 2018 became a bit of a breakout year with support across all areas of the music industry. He was second to headline Reading Pride and his music featured alongside brands such as EE, New Look and Legoland, amassing upwards of a million in-store plays to date  and gaining  endorsement from Sennheiser and Faith Guitars.

Listen to 'High' via Soundcloud here 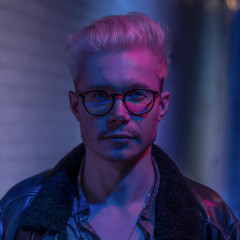