The destruction of a musician's wooden instruments at the hands of US customs, on the grounds that they are agricultural products and thus pose a biological hazard to native species, poses a grave question to musicians the world over: is there any justification on which an instrument that forms a key part to someone's livelihood can be destroyed because of what it is made of?

Boujemaa Razgui a professional flautist landed at New York's John F Kennedy airport in December 2014, with eleven hand-made Ney flutes necessary for his professional playing. He had hand made the instruments and had the instruments for many years and flown with them many times. On this occasion it was alleged along with some of the native bamboo for their manufacture that they were seized by US Customs and Border protection agents and destroyed. The reason given being that they were made of agricultural material that is not allowed in the USA. There is some controversy regarding how and why the flutes and Bamboo were destroyed or removed from his baggage.

Razgui, a Canadian citizen and native of Morocco was returning home to New York over the Christmas holiday, when the eleven flutes were seized. This sent outrage to many music groups who disagreed with the removal of the instruments, thus allegedly depriving this man of the tool of his art and the ability to earn a living. Previously it was also reported that allegedly a historical wooden flute of some significance suffered the same fate.

This is reminiscent of challenges that have faced many musicians who wish to travel or import their wooden instruments And the problems they face due to regulations regarding endangered wood and ivory relating to many types of Instruments requiring documentation of provenance or the risk of having them confiscated because of boarder protection issues regarding agricultural material that is seen as a threat, or could harbour insects of fungi that can be a risk to the native species or agriculture. And carry pathogens or pests

The Ney flutes in question were made of bamboo, and often used in the making of Middle Eastern musical compositions. According to the US Customs and Border Protection Web Site, bamboo is divided into different categories, some are permitted some are not. In general bamboo that is not thoroughly dried is still capable of propagation and therefore it is prohibited. Bamboo that is thoroughly dried and split and cut lengthwise (rendering it incapable of propagation) will be subjected to inspection and after consideration may be released. Un-split dried bamboo canes /stakes and poles are also allowed entry after inspection. Bamboo furniture, bamboo cloth and other bamboo products do not require fumigation and after inspection will be released. So what of the eleven bamboo flutes were they seen as a threat or contaminated by the raw bamboo they were with ? was it correct to prevent their entry into the USA. And should the same rules apply to valuable or wooden instruments as apply to other agricultural materials or products,

What about old violins or instruments that would not withstand Heat treatment or product's to rid them of woodworm or other pests they could harbour,

In 2009 and 2011 the famous Gibson Guitar factories and offices in Memphis were raided by agents of the fish and wild life services who seized wooden pallets and guitars for similar reasons.

As a result there have been many blogs written, and many differing opinions as to the rights and wrongs of such laws and their enforcement.

Relating to the alleged flute incidence there are many blogs saying this makes no sense I can understand not allowing the flutes into the US but why destroy them? Better to put them in quarantine and give the guy a chance to retrieve them. Some said they would demand the broken pieces.

The bamboo used is rare and not found in the USA, being from Morocco, a minimum of two years old to get the correct thickness to make the flutes. Therefore he needed the bamboo and flutes, as they are not easily available.

Air travel is always a nightmare for musicians – I doubt there will ever be anything done to rectify this. Inexcusable is the nicest word that comes to mind.

If bamboo flutes are agricultural products, so is anything made of wood or wool or cotton. Where do you draw the line?

It must be said the majority of blogs were not in agreement comments.

The object was to remove potentially dangerous bugs that could pose a threat, not stop them from being used as flutes

Fresh Bamboo is prohibited from entering the U.S

I don't know what pests that Bamboo might be carrying and that's the issue. But most likely its because the of the potential devastation of the environment and the economy

Regulations are there for a reason and I am sure there are other ways to get bamboo reclassified, maybe having the Bamboo boiled or something to kill potential pests

If something isn't allowed in the US the owner cant legally retrieve it anyway , and you cant expect customs to store all the fruits , veg and illegal products they seize and let the owner claim it back when they leave. Therefore they have to destroy such products.

Many of the banned items are banned because they carry pathogens or pests , just storing it in the Us carries some risk. It is a very emotive subject especially when Instruments of great value and age are of concern, I know many musicians who will not try to take instruments abroad or have instruments in certain country's that they leave behind when they travel.

Many will not take instruments to have them put in the hold with other Cargo because of extremes in temperature, some are too big to take as Hand luggage, and some pay for seats for such as Cellos etc. , Then there is still the problem of customs and illegal materials or plant material.

It was reported the famous comedian Bill Bailey when travelling to Australia had his Kazoo confiscated, it having been said to have contained something organic.

My conclusion is that I can see both sides of the argument, however there must be some way of putting into quarantine musical items of great importance due to their age or rarity and there must be a way found to make sure that such Instruments are treated with special requirements and priority,

But there should never be a good argument that puts native species at risk and it is necessary to have strict laws that keep the borders safe. 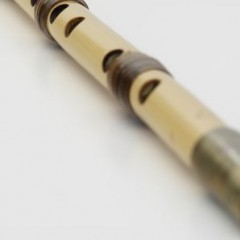 Are wooden instruments potentially a biohazard?

The destruction of a musician's wooden instruments at the hands of US customs, on the grounds that they are agricultural products and thus pose a biological hazard to native species, poses a grave question to musicians the world over: is there any justification on which an instrument that forms a key part to someone's livelihood can be destroyed because of what it is made of?