I think this statistic pretty much sums up the issue:

63% of undergraduates that study creative art and design are female and yet only 29% of the artists represented by London’s prominent galleries were women. This begs the question- how has this happened? Why is it still happening? Is it changing?

‘Why have there been no great women artists?’ Asks feminist art historian Linda Nochlin and the answer is that there are, they’ve just been ‘removed’ from history books. For example in the Renaissance, Nelli was a female artist who created magnificent biblical paintings and yet the majority of people have never heard of her because she was ‘dismissed as another nun with a paintbrush’. This hardly seems fair. The same applies for Clara Peeters who worked in the 17th century and Louse Elizabeth Vigee Le Brun.  So what are people doing about it? In short, some galleries are including these historical female artists in exhibitions to bring about awareness of their works for example, Clara Peeters had her first solo show at the pradp in Madrid in 2016. Having said that, whilst it shows progress it is merely a small step in the right direction.

Secondly, what sparked this debate? The answer: the Guerrilla Girls. This was an annonymous female artist group who adressed these issues of sexism in art through posters, billboards and public appearances all whilst wearing gorilla masks and going under the names of deceased female artists. In 1985 they began their campaign confronting issues with posters that include shocking statistics or crude messages. One poster of significant interest was one about female solo exhibitions in galleries in 1985 and in 2015. Each gallery had only exhibited one more female artist since 1985 which for many of the galleries meant that they only exhibited one. This shows a definitive lack of progress in the large measures that are wanted for female artists.

To put the lack of representation of women in art and the inequality into perspective, we need to understand the amount of women involved in art. 51% of visual artists are women  and 65-75% of students in MFA programs are female too which shows that they are a majority. However, in the 134 commercial galleries in London which show 3263 artists only a staggering 31% are female and 78% of these galleries show more men than women. And yet, according to Artfinder (similar to Etsy) women consistently outsell men and for every 1 million of art made by men that is sold, women sell £1.16m. Therefore, these statistics are contradictory- how can women be more successfull in selling their art online and be the majority and yet have limited spaces in galleries. Put simply, females are underrepresented as they are neither better nor worse than their male counterparts.

Whilst this all looks very bleak for women, there has been change in the right direction. For example, the Turner prize (which is a prestigious artist award) has improved by 44% in the last 10 years which is the start of women getting the recognition they deserve. Also, female artists are starting get representation because in 2017, 73 year-old Phyllida Barlow exhibited her installation at the British Pavilion in Venice Biennale which was her first gallery representation of her entire career as an artist.

So you see, whilst things aren’t equal by any means, we can begin to see feminist artists chipping away at this issue started off by the Guerrilla girls in 1985. For me personally, I believe that there still isn’t equal representation in the arts and a lot needs to be done both in getting equal representation for the future and  re-writing women into the past.

If you have any views of this arts issue, please leave a comment and share it with me.

Photo: Do Women Have To Be Naked To Get Into the Met. Museum?
© courtesy www.guerrillagirls.com 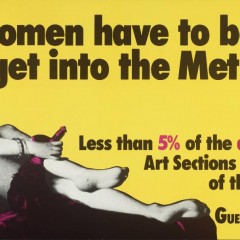 Women in Art - inequality and underrepresentation

I think this statistic pretty much sums up the issue:

63% of undergraduates that study creative art and design are female and yet only 29% of the artists represented by London’s prominent galleries were women. This begs the question- how has this happened? Why is it still happening? Is it changing?