Music is meant to be medicine for the soul, and the music released this year has been exactly what the doctor ordered.

We saw debut albums, long-overdue comebacks, heavy metal and a resurgence in hip-hop. We have collated what we believe to be the 10 best albums of 2017, but there has been plenty more for you to sink your teeth into once you're done dancing round the room to this lot. And yes, it is still perfectly acceptable to sing into your hairbrush!

We start of our list with some heavy s**t! Pittsburgh natives Code Orange gave the metalcore genre a well-needed revival with their major-label debut. The tracks are heavy as well as being impressively diverse and artistic, demonstrated in songs such as “Kill the Creator” and the titular “Forever”. The Grammy-nominated band have had an explosive year, and thus have earned themselves the loyal fanbase they deserve.

Indie Folk revolutionaries Alt-J continue to amaze us all by giving us a splendid album that provides us with the iconic warm, fuzzy style that soothes the mind & soul. Of course, Alt-J aren’t without their experimentation, venturing into classical music, choirs, traditional folk (of course) and combining them with beautiful harmonies and their signature indie style. It’s no wonder they’ve been shortlisted for the Mercury prize for a second time!

This is an album the office has had on repeat since its release day - Paramore returned four years after their self-titled album, giving us 100% pure 80’s vibes that make you want to bop to the beat with crazy hair and double-denim outfits (why was that a thing?). However, the album stands out as the happy synth music contrasts the exhausted, anxious, and melancholic lyrics, detailing lead singer Hayley Williams’ struggles throughout her twenties, and coming to terms with adulthood. Paramore have been my favourite band for ten years now, and they have yet to disappoint me.

Another favourite of mine returns eight years after their last album was released. Science Fiction sees Brand New bring back their influential dark, indie-tinged rock sound, as heard in "The Devil and God", that reaches out to the isolated and depressed by turning up the quality and songwriting to full max. Addressing issues such as mental health and alienation, the band’s fifth effort is the perfect ending to their career, and I’m proud to have been on this journey with them.

New to the music scene is Sampha, with his debut album filled with trippy R&B vibes and beautiful piano playing skills, shown in “No-one knows me like my Piano”, that offers you a perfect collection of songs that soothes the soul and reflects a talent in the making.

Queens of the Stone Age - Villains

Stoner-rock legends Queens of the Stone Age return in 2017 with their angry blues-rock music that continues to defy the odds. This time, they add a devilish dance-rock sound into the mix, resulting in a critically acclaimed masterpiece that shows us that the Queens are still alive and kicking. Songs like "The Way You Used to Do" are fine examples of the band continuing to expand their sound and challenging perceptions. A fine album from a fine band.

After three years, one of our favourite New Zealanders returns with a masterpiece that manages to live up to the standards set by her debut. A concept album that explores solitude with a trippy pop atmosphere, Lorde continues to establish herself one of the young artists that define a generation.

The singer has had a troubled few years; from her struggles with an eating disorder, to her court battles with former producer Dr Luke; it nearly cost her career and her life. Rainbow proves to us all that she ain’t going nowhere. Being a stylistic departure from her early dance-pop days, she incorporates other genres from glam rock to folk into a strong and defiant pop sound - one that tells us that you never have to let those b*stards win.

A very bizarre entry from Taylor Swift, we see the Country-turned-Pop singer hit back at the media and everybody who doubted her with a dark and sassy sound combined with rather petty lyrics. Songs like “Look What You Made Me Do” and “...Ready For It?” summarise her anger and frustration with the media who continue to make a spectacle of her and her relationships. Whilst it may not be my kind of music, you can clearly tell the girl is on a warpath.

Hip-hop has never had such a renaissance - Kendrick Lamar established himself as a master of his craft in 2015 with "To Pimp a Butterfly", which was also considered by many publications as the No.1 album of the year. This year, he built on that reputation with "DAMN", giving us his usual political and socially conscious messages in his songs with a more edgier and psychedelic sound that hits pretty DAMN hard (I’m hilarious). With more Grammy nominations under his belt, Lamar is certainly on the rise to being one of the greatest rappers of his generation. 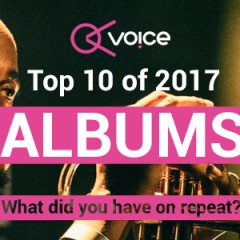