I met the young people who've just gained their Bronze Arts Award and spoke about how they got involved!

In the 'Green Room' on the Mezzanine floor, a group of young people aged 15 - 18 have just embarked upon a week of film-maker training under the guidance of Ravensbourne students and Youth Projects Producer Martha Burns Findley. After watching their film debut screening, in which a number of them starred, all while producing, filming and directing, I managed to talk to some about their involvement with Arts Award and what they've achieved.

How did you get involved with Arts Award?

Soriyah: I'm in the arts council in my school and the head of the art department offered it to me.

Calum: I heard about it through school because I want to be a film-maker, a teacher recommend I do it.

James: I'm not in school anymore, I just work in a pub. But I have an interest in photography and I know the teacher, she recommended I do it too.

So you partook in a week long course. Can you tell me a bit about what that entailed?

Calum: Day one was mainly getting to know each other, because teamwork is a big part of it. Later that day we began to learn new skills, such as camera angles and how to set up a tripod.

Soriyah: Then throughout the week we began developing ideas [on] how we could go about making an advert for the museum. Eventually we came to two different conclusions. One was to film around the Queen's House and the other was to film around the National Maritime Museum, so we combined them together and that's how we made the film.

Having achieved your Bronze, will you continue on to Silver and Gold?

James: If an opportunity arrives, yeah, definitely. I haven't looked too much into it, I'm just going to keep doing all that I can and see what comes of it.

What was your favourite aspect of the course?

Calum: I think, learning how to work as a team. On the first day I kept trying to take charge, but then I learned how to fall back and trust other people, so yeah, I definitely did learn something.

Soriyah: I really like the fact that you're getting an Arts Award but at the same time you're having fun and you're meeting new people, I met some really great people, so, I'm happy. 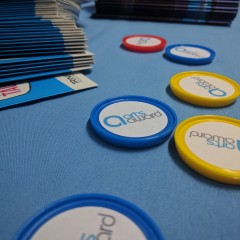 I met the young people who've just gained their Bronze Arts Award and spoke about how they got involved!