Not conforming to typical theatre standards, Silvia Calderoni uses her unique attributions to create a performance as interesting as herself.

"Wouldn't it have been easier to stay as you were?"

Silvia Calderoni's performance exploits the politics of theatre as she slithers around the stage much like a cobra; shedding layer upon layer of clothing while revealing a new identify and burying the definition of a singular persona. A multidimensional performer, Calderoni portrays an array of personalities throughout the 80-minute spectacle, expressing her struggle with identity, and the former experiences and exploitations of hermaphrodite 'Cal', a character adapted from Jeffrey Eugenides novel 'Middlesex'.

'MDLSX' opens with a video projection, a medium favoured by directors Enrico Casagrande and Daniela Nicolò, of a young Calderoni accompanied by her father as she sings karaoke. The illusion of childhood innocence is shattered as a now adult Calderoni hurtles into the space. Not initially noticeable, we are gifted with a moment of realisation when it dawns upon us that the baby-faced girl, once staring uncomfortably down her mother's lens, is now standing meters in front of us, sporting a loose t-shirt and clutching canisters, all while radiating a stench of hairspray.

A one-woman show, she somehow manages to paint the entirety of the space, the stage her canvas, as she mirrors the meandering course her life has taken. Early on, the performance raises the question - 'What is she?' - It soon comes to the forefront that it does not matter. As her slender frame writhes around the stage, wearing nothing but a persona, we learn that Calderoni belongs to no gender. Even when pointing a live-stream camera (projected upon a large sphere screen hanging from the back-wall) directly up towards her genitalia, Calderoni remains a mysterious figure of androgyny.

Making a mockery of her belated puberty, Calderoni fills her ill-fitting clothing with wigs, a clever portrayal of a child longing to grow up. I'd love to see how her performance differs from night to night as Calderoni feeds off the audience. On numerous occasions myself and those around me found ourselves laughing as she played upon our humour.

Blooming flower imagery is projected upon the back-wall, as she exudes a 'so cool' demeanour; throwing rolls of tape accurately into a suitcase positioned across the stage with barely a look, and casually sipping from a glowing, blue lit bottle of water, which in itself is fascinating to watch. A natural performer, her suave manner is infectious.

Although not entirely autobiographical, the play contains old home-video footage which remains a key source of reference throughout the piece. The set is dressed simplistically, with Calderoni's props laid out upon a table, and a silver, triangular piece of fabric positioned centre stage. As Calderoni moves within the restraints of the triangle, it gives me the metaphorical sense of an enclosure, and that perhaps Calderoni's complex and fragmented, jolted movements are 'Cal's' inner thoughts within his brain, the triangle representing a skull-like structure.

The piece demonstrates gender-bending characters, a new mode of dramaturgy introduced to me by Italian theatre company 'Motus'. Founded by Enrico Casagrande and Daniela Nicol, their company moves between countries, historical periods and disciplines. It reminds me of the National Theatre of Scotland's motto "theatre without walls", as Motus' work is open to all, told by all. It is Motus' purpose to react to conflicts in the modern world and demonstrate them through art without purposely being a provocative, despite being labelled so. Their muse, Silvia Calderoni, began working with Motus 10 years ago and has since won multiple awards for her contribution to the arts. A notable figure in Italian theatre, Calderoni has appeared in numerous productions including 'Alexis. A Greek Tragedy' (an interpretation of Antigone) and recently as 'Bellino' in Sky Arts 'Casanova Undressed'.

As well as being an actress, Silvia Calderoni is a DJ, as told in the post show discussion. Heavily influenced by the soundtrack, Calderoni's dance and figurative expression is accompanied by the likes of R.E.M, Buddy Holly and The Smiths all "having relevance" to the narrative, their stories resonating with Calderoni.

"I'd like to have a word for 'the happiness' that attends disaster."

Flemish, French and English subtitles followed her Italian spoken word; a multicultural aspect that was appreciated. The text is that of simplistic poetry, and her words lead a sphere of contemplation amidst my thoughts. She spoke of how words fail to express a deeper meaning within complex emotions, a contradiction in terms as she narrates her way through the LSD fueled episode. Despite the beautiful language, the majority of the play was delivered through movement and other theatrical elements such as lighting, set and costume.

I have never witnessed a performer who is both actress and DJ; coinciding skills as unique as the charisma she exudes. 'MDLSX' proves freedom of expression and the validity of Calderoni (and other gender-fluid artists) as performers. Not conforming to typical theatre standards, she uses her unique attributions to create a performance as interesting as herself. I went in with zero expectations, and was left frantically wiping my watering eyes, not to miss the ending, containing home-video footage showing the reintroduction of her father as he welcomes home a 17 year-old Silvia.

As Calderoni takes her final bows, the sound of "Please, Please, Please" by The Smiths humming in the background, I catch her eye. Her authenticity as a performer was highlighted when she exchanged a nod between us; as one of my hands remained gripped to my chest, the other wiping tears from my damp cheeks. She is not afraid to connect with her audience, a skill that not only exemplifies her authentic performance, but her human qualities.

The most important message I obtained from the piece was not change, but finding a deeper meaning in what you've always been. 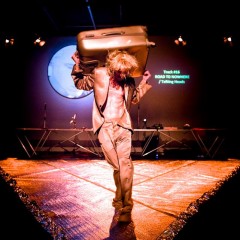 International Theatre: A review of ‘MDLSX’

Not conforming to typical theatre standards, Silvia Calderoni uses her unique attributions to create a performance as interesting as herself.