Each actor brought a wealth of knowledge and personal liaison, a unique dynamic I felt honoured to observe.

Last year it was announced that Kenneth Branagh and his star-studded theatre company would be occupying the Garrick Theatre over 13 months; producing 6 plays throughout their course. With their final play 'The Entertainer' coming to a close last weekend, I've summarized their most poignant moments that captured audiences nationwide.

The season opened with Branagh and Dame Judi Dench starring in Shakespeare's 'The Winter's Tale'; this feat marked their latest collaboration in their 30-year working relationship. My friend dragged me to our local cinema to watch their live broadcast last December, and with a running time of 2 hours 45 minutes, it was Dench's stellar performance that kept us engaged, and lit up the auditorium that was broadcast in 520 cinemas throughout the UK (and over 100 across Europe and Canada!).

Branagh's residency at the Garrick restored my faith in ensemble theatre, an art I feel is often lost among modern practitioning. I particularly appreciated the intricate attention ploughed into his programming, with one-act comedy 'Harlequinade', starring Zoe Wanamaker, telling the story of a company whom attempt to stage 'Romeo and Juliet'; 4 months later the Kenneth Branagh Theatre Company perform their own rendition of the classic, with Cinderella's (Dir. Kenneth Branagh) Lily James. The detail in Branagh's season strives further than clever programming, though, with his well-cast ensemble of actors being more than mere performers, but friends. Each actor brought a wealth of knowledge and personal liaison, a unique dynamic I felt honoured to observe.

After copious cinema visits to see their live broadcasts, in October of this year I had the privilege of seeing their final show 'The Entertainer'. Ironically, I just happened to attend on the night they were filming for live broadcast, a sense of closure I subconsciously craved. I feel so lucky to have witnessed the likes of Branagh and actress Greta Scacchi as I sat in the packed auditorium upon a red, velvet seat; the space laced with crew and technicians ready to capture their supremacy. Branagh ought to be credited for cleverly programming this play a year prior to the Brexit ordeal, as the play oozed a sense of British identity. A frivolous mix of contemporary and classic graced the stage, and kept me engaged throughout the woes of Archie Rice's life.

The show ended as it began, with Branagh's character, Archie Rice, lit solely from behind (creating a silhouette) tap dancing. A haunting image masked by Rice's tumultuous determination to carry on. This role was first portrayed by Laurence Olivier in the 1950s, a comparison not unfamiliar to Branagh, as he had often been compared to the late actor; particularly since playing Olivier in 'My Week with Marilyn'. Having watched the film, I see how Olivier brings a sense of desperation and despair to Rice's character, something only skimmed by Branagh, however, it was his panache and undeniable finesse that carried him through.

Unfortunately I didn't get the opportunity to see 'The Painkiller' which they produced this Spring, but Branagh and comedy pairing Rob Brydon evoked ravishing reviews, as read here. 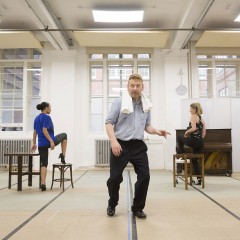 Kenneth Branagh’s Season at the Garrick

Each actor brought a wealth of knowledge and personal liaison, a unique dynamic I felt honoured to observe.