From A-Z everything you’ll need to see about this year’s 2022 entries (continuing with countries Q-Z).

To catch up on last week’s Eurovision entries (countries J-P), follow this link.

Romania’s entry is a dance track with captivating choreography between WRS and four dancers. In terms of delivery, WRS voice isn’t the strongest but Llámame’s charismatic stage presence makes up for this. It’s definitely a summer song, just doesn’t quite match the success of other Eurovision songs that have done something similar (as in Fuego, nothing will beat Fuego). The chorus is the strongest part of the song, it is sung in Spanish and has a frustratingly memorable quality to it. Will it be memorable enough to make it to the Turin finals? I doubt it, but it might surprise everyone.

Last year, San Marino sent in ‘Adrenalina’ by Senhit with a surprise feature by none other than FloRida. It was a strange experience to say the last. This year, Achille Lauro’s ‘Stripper’ couldn’t be any more different to ‘Adrenalina’ if it tried.

Achille Lauro is an Italian rock singer whose song ‘Stripper’ sounds as if it would appear as a losing act in the School of Rock. It sounds generic and AI-made. There is no substance beneath this track, other than the fact that it tries to be a rock song. The vocals are a shaky foundation for the song, and it’s not Maneskin 2.0 to say the least. I’d rather watch FloRida.

Washing your hands on stage and a nod to Meghan Markle were not on my Eurovision bucket listen this year. Konstrakta questions ‘What could be the secret of Meghan Markle’s healthy hair?’ in the song ‘In corpore sano’. Naturally, the song went viral in Serbia. This is more performance art than Eurovision song contest performance, delivered with a deadpan expression and immersive staging you literally watch Konstrakta wash her hands live on stage – and it’s great. The instrumentation of the song is strange, with rhythmic hand claps that’ll get audiences joining along whilst Konstrakta really makes use of the COVID-19 2-minute handwashing guidance. Cannot wait to see this live in Turin, it’s going to be a legendary performance, to say the least.

Underrated entry. Wild card. Eurovision’s vibey dark horse. Slovenia’s ‘Disko’ has immaculate music production. It’s got a thick bassline, an addictive beat, a chirpy guitar and a guy on keys who really steals the show. ‘Disko’ is an anime-opening song level of excellence. The one flaw in Slovenia’s entry is the singer’s stage presence, he seems a bit restrained and expressionless – though these are all things that can change in the final performance. For the Turin performances, I vote for a camera solely dedicated to all the other band members and a split-screen showing them all grooving. That bass though. Those drums. The keys! One of the best songs of this year, and I cannot believe that people think this won’t qualify for the finals – it’s a tonic of a song, and it must make it to the Grand Finals at Turin.

Dutch producer Arjen Thonen originally wrote ‘SloMo’ for Jennifer Lopez, when she didn’t respond it found itself as Spain’s Eurovision entry. It didn’t quite make it to Jenny from the Block, but instead is excellently delivered by Chanel representing Spain. Her vocals are reminiscent of Camilla Cabello, this is a summer dance song through and through that’s easy to remember because it is so repetitive. What really sells the song is Chanel’s star power and stage presence, she tackles complex choreography that makes the entire performance look like it’s for the Superbowl halftime show. She really did the most with this performance, and it’ll be well-received at Turin.

Sweden consistently has great Eurovision entries, you can always count on Sweden to send in something with fantastic music production. Maybe they’re just really determined to win, maybe they just have all-around great music. In ‘Hold Me Closer’ we hear Cornelia Jakobs’ raspy vocals and ability to capture heartbreak through her voice. It’s sentimental but haunting, a lyrical journey delivered with raw vocal characteristics. As with many of Sweden’s previous entries, it’ll do well.

Lyrically, Marius Bear’s ‘Boys Do Cry’ is a well-written song. It’s a gentle ballad, that leans more as an ode to heartbreak and an exploration of toxic masculinity. Unfortunately, I think the song may get overlooked amongst the more brash entries this year. It has a powerful message, and it’ll make an impact on the stage – it’ll be interesting to see the staging of this song and how that might impact the overall performance.

Eurovision bop in the making, and bookies’ favourite to win. ‘Stefania’ went straight on my playlist, it’s experimental, modern and just a stroke of excellent music production. It mixes rap and folk singing. ‘Stefania’ experiments with instrumentation from double bass to electronic drums, making the track a melting pot of a whole lot of styles that makes it incredibly memorable. ‘Stefania’ has the best flute solo from the Ukrainian sopilka (which I could listen to on loop). The staging is unhinged and chaotic, but it suits the musical soup that Kalush Orchestra is mixing up on stage. It’s a strong statement in the background of political headlines, and a song sung in Ukrainian like ‘Stefania’ is definitely going to hold the national flag high in Turin whilst the world watches on.

Finally, we find ourselves finishing this alphabetical list with the United Kingdom. We’re no strangers to coming last. However, ‘Space Man’ is a hopeful entry for the UK. Unlike our earlier entries, Sam Ryder is our first well-known entry in quite some time. The TikTok star has 12.1 million followers for sharing clips of his soaring vocals. His vocal talent does not show any limits, with ‘Space Man’ not even the sky is the limit. Sure, there are a few predictable soppy lyrics that equate being lost in space to being in love like ‘I’d circle ‘round the world and keep on coming back to you’. However, Sam Ryder’s voice really brings it back down the earth and presents the UK with a valid chance to orbit over to the left-hand side of the board. I don’t think we’ll crash land into the dreaded nil points position for the third year in a row with ‘Space Man’, but we probably won’t win either with the universally known hostility and bitterness towards the UK in the content (it’s to be expected at this point).

With that, the alphabetical recap of Eurovision 2022’s 40 competing countries from A-Z is complete. From Meghan Markle, salads, ballads and Subwoolfer – this year is going to be eclectic and hectic but we cannot wait to see what happens. Stay tuned for more Eurovision content including predictions, opinions and reactions in the run-up to the May competition held in Turin, Italy. 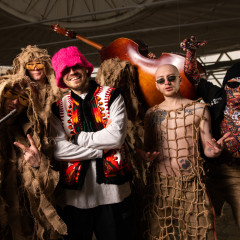 From A-Z everything you’ll need to see about this year’s 2022 entries (continuing with countries Q-Z).