Both are instant classics, but Spielberg tells the same story in an updated way – some critics even argue it surpasses the original. Here's how the two compare for better or worse.

In the backdrop of late 1950s New York City, West Side Story is about two star-crossed lovers Maria and Tony. Their love story crosses cultural barriers, which in turn causes a spark to turn into a flame with rival working-class gangs – the Puerto Rican Sharks, and the Caucasian Jets.

However, when put side by side, the two films are distinctive. They’re not carbon copies of the same musical. What is done similarly by directors Spielberg (2021), and  Robert Wise and Jerome Robbins (1961) is that they all communicate in the same love language for the craft – and it shows through all the way to the final cut.

In a spectacularly lengthy Twitter thread, director Guillermo Del Toro (Pan’s Labyrinth, Shape of Water) hailed scenes from Spielberg’s adaptation as ‘Extremely hard to execute. Pure, masterly clockwork precision’. Unpicking the film’s flamboyant dance scenes, Del Toro wrote that: ‘almost all of them require brain-surgery levels of precision. I was elated from the purity of his audiovisual painting strokes’.

Here, we follow in Del Toro’s footsteps to take a look back at both adaptations. We look at which painting strokes are a touch of genius and which don’t sit quite as well with the beholder’s eye.

In West Side Story (1961) one of the most glaring issues it faces is its use of whitewashing – a Hollywood practise of casting white actors as non-white characters. In the 1961 edition, Puerto Rican leading characters such as Maria and her brawling brother Bernardo is played by Natalie Wood and George Chakiris. For the roles, they applied brownface – darkening their skin to change the appearance of their ethnicity.

The only actor of Puerto Rican descent in West Side Story (1961) is Rita Moreno who plays Anita, Bernado’s partner.

Thankfully, Moreno also makes an appearance in Spielberg’s 2021 version as Valentina, a revamped version of Doc, the owner of the drugstore where Tony works.

In Spielberg’s edition, the casting grounds the film in a sense of realism. At the 2022 BAFTA awards, West Side Story’s casting director Cindy Tolan won the award for ‘Best Casting’. A deserved win because Tolan’s work on West Side Story has brought rising Latina stars into iconic leading roles, for example, Rachel Zegler as Maria and Ariana Debose as Anita (2022 Oscar winner for Best Supporting Actress, following the footsteps of Rita Moreno’s win for Anita in 1961).

The on-screen representation in the 2021 version is miles ahead of what was originally portrayed in 1961, it gives voice to rising Latinx talent today and whole-heartedly trusts them to tell these important stories in their own authentic way.

A subtle difference between the two films can be caught in the initial lyrics starting Anita’s fan-favourite ‘America’.

In the 1961 version, it begins with ‘Puerto Rico / My heart’s devotion / Let it sink back in the ocean / Always the hurricanes blowing / Always the population growing / And the money owing / And the sunlight streaming / And the natives steaming / I like the island Manhattan / Smoke on your pipe / And put that in!’.

Whereas, in the 2021 version it starts ‘Puerto Rico / You lovely island / Island of tropical breezes / Always the pineapples growing / Always the coffee blossoms blowing / And the money owing / And the baby’s crying / And the people trying / I like the Island Manhattan / Smoke on your pipe and put that in!’.

The key difference here is how Puerto Rico is fabricated in Anita’s lens, Anita is a character that favours living in America. In the 1961 version, Anita complains about Puerto Rico in a negative way commenting on overpopulation and debt. It is somewhere that should ‘sink back in the ocean’.

In the 2021 version, Anita comments about the redeemable qualities of Puerto Rico saying it is a ‘lovely island’ painting it as a beautiful place to live. It’s just not personally for her, but it’s not an attack on the place.

This subtle change in the 2021 version is very important, as it reframes how the audience sees Puerto Rico. There is no negative connotation attached to the country that might seep into everyday bias.

There is power in knowing or not knowing what is said. It is a power dynamic that underpins the entire film and deals with it sensitively. There is no need for subtitles, in Spielberg’s own words: ‘I’d simply be doubling down on the English and giving English the power over the Spanish’.

Frankly, after the representation issues in the 1961 film, this is a key directorial choice that was incredibly important to include within the film. Giving Spanish-speakers the space to use their language on their own terms, and not having to cater to a non-Spanish speaking audience for the sake of it being more appealing to them.

To be honest, I didn’t really believe the chemistry between Rachel Zegler’s Maria and Ansel Elgort’s Tony. It sort of fizzled out. There was one key scene, where the two pretend to get married at a statuesque altar – it’s all very serious, and the sense of naivety in the original is lost.

That being said, I have to admit there is one scene where the 2021 version hits the right note with the romance. The meet-cute scene between Spielberg’s Maria and Tony is a technically flawless scene. It is a spark of magic where the two lock eyes, as shadows of dancers whip past them as they move closer to each other. Though, this might be a testament to the cinematography.

The 1961 romance is more of a slow burn, reflecting the naivety of the situation Maria and Tony found themselves in within two nights of knowing each other.

In the 1961 version, Maria and Tony pretend to get married in a dress shop. In their fun and innocent puppy love, they acquire mannequins dressed in formal Sunday attire and pretend that these inanimate objects are their loved ones, finally accepting their love for each other.

However, what the 2021 version does have is palpable chemistry in scenes starring the Jets leader Riff (Mike Faist) and the Sharks leader Bernado (David Alvarez). I know they’re sworn enemies, and in some alternate universe this definitely exists as fan fiction, but they frankly just riff off each other and it is electric.

The relationship between Spielberg’s Riff and Bernardo made the setting of West Side Story all the more believable, it becomes a love letter about this class and cultural divide in 1950s New York – rather than predominantly a love story between two star-crossed lovers in the 1961 version.

I’m not cool with the placement of ‘Cool’

If there is one element of the 1961 film that I wish Spielberg kept, it would be the placement of the song ‘Cool’ within the film.

In the 1961 version, when Riff and Bernardo have died in their brawl, the Sharks and Jets are left with no leaders to tell them what happens next. The Jets retreat and try to process what has happened to their personal leader and friend Riff.

When the song ‘Cool’ runs it is an ensemble song, where the Jets are telling each other not to do something that they’ll later regret. It also reads as them calming their emotions in case the police arrive. Ultimately, if we dig deeper it is a song about toxic masculinity and the concealing of emotions like grief.

However, in the 2021 version, Spielberg places it before the brawl has even begun. It is when Riff acquires a gun, and Tony is trying to calm him down – and the two randomly jump over holes in a pier, with dull moments where Riff nearly drops the gun into the water but then just catches it. In the context of the film, it doesn’t make sense. It also becomes a song about Riff, instead of a collective reading on toxic masculinity. The Jets hover in the background with not much purpose (probably reeling that their chance to shine was taken away).

Whilst some critics say that the 2021 version is better than the original, they both have their pitfalls as well as their individual successes. One thing is for sure, the 2021 version remedies some of the most fundamental failings of the 1961 version in regards to authenticity and identity (whether it be through a subtle change in lyrics or casting).

I’m not going to name an outright ‘winner’ in this comparison because, just like the end of West Side Story, there is none. No one wins, and no one loses. The moral of West Side Story is that in a world full of everything wrong, just maybe hope can shine through the gaps – and we should listen to that in both reimaginings, both are dedicated love letters to their craft.

Ultimately, there’s a place for both the 1951 and 2021 versions of West Side Story on our screens, memories, and hearts. 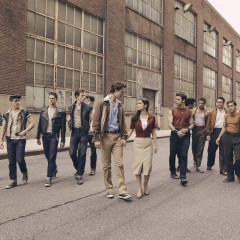 Both are instant classics, but Spielberg tells the same story in an updated way – some critics even argue it surpasses the original. Here's how the two compare for better or worse.