Brutal in both content and message, Squid Game seemingly came out of nowhere to (rightfully) take its place as one of the most talked about shows on Netflix.

Cards on the table, I got Squid Game so wrong when I first saw the preview for it. I figured, “Oh hey, it’s Saw.” To me it looked like just another one of those death-trap / twisted social-experiment movies that all seem to have the same message: human beings are fundamentally crap. I don’t like those movies. I like Squid Game.

First of all Squid Game is a series, not a film, so that’s wrong impression number one. Secondly, unlike the types of media mentioned earlier, its core themes paint a message far more complex than “see that sweet old lady across the street? She’d butcher you with a cleaver if she was given half the chance.” I really cannot emphasise enough how bloody exhausting it is to watch a film only to discover that its main goal is nothing more exciting than to tell you, “humans are bad.”

The humans in Squid Game are not bad, for the most part. Okay, the organisers of the murder-party death games and the psychopathic VIPs they cater to are pretty bad, but the majority of the participants aren’t. They’re just desperate.

The main character is exceptionally likable. Seong Gi-hun (portrayed excellently by Lee Jung-jae) is, for want of a better word, a bit of a loser. He lives with his mother, has a gambling addiction, struggles to provide for his daughter (who’s on the verge of moving to the US with her mother and step-dad) and is in danger of losing his kidney to a loan-shark. Yet he is also unshakably polite, defiantly kind-hearted, and always sees the best in people. He lives in such a shoddy situation because he was fired for participating in a strike after a decade working at a motor company.

The showrunners knew what they were doing with Gi-hun. So much of his personality is built around thwarted desire. Earnest and determined, but marred somewhat by his desperation for money, the audience quickly becomes invested in his story. A story which takes a dark turn when he’s convinced to participate in a mysterious game.

Upon accepting the invitation, Gi-hun is rendered unconscious and wakes up in a large room that I only now realise looks exactly like a primary school P.E hall. Hundreds of others wake up with him, all of them wearing the same jumpsuit with a number on it. What follows is a back-and-forth between the group and their masked captors, during which they learn that they’ll be participating in six games, all of which they must take part in and win, otherwise they will risk elimination (hint, hint). Taking elimination to mean getting kicked out, they all accept, once they’re promised an impressive heap of money.

I won’t go into too much detail, but it becomes clear after the first game that the stakes are substantially higher than the players thought. Terrified, the competitors shudder to think what’s in store for them next. It’s here that Squid Game makes its smartest play, one so risky that it could have robbed the show of all tension in one fell swoop if it wasn’t for the sheer force of its thematic cohesion. It lets the players leave.

Taking advantage of a clause in the contract they signed before entering, the competitors vote to end the game and go back to their normal lives. What follows is a sequence that masterfully sets up the show’s main concern.

During our brief time in the games hall, we’re introduced to a number of the other players. Once everyone is released, the show follows these players in their day-to-day life. Their lives aren’t good. Abdul Ali (Anupam Tripathi), a trusting if not outright naive migrant worker who risked his life to save Gi-hun in the first game, must send his wife and son back to Pakistan after an altercation with his sleazebag, wage-withholding boss. Sae-Byeok (HoYeon Jung), portrayed as cynical and amoral, but with a rare to see soft side, has to falsely reassure her younger brother that she will be able to smuggle the rest of their family out of North Korea. Perhaps most tragically of all, Gi-hun discovers his mother now suffers from diabetes, and if he can’t afford her medical bills, she will more than likely die.

Each former competitor is asked if they would like to rejoin the game. All but 20 accept.

You could be forgiven for thinking, “well that’s alright now, they’re willing participants, it was foolish for them to re-enter and now anything that happens is on them.” But this implies it was truly a choice. It’s implied that every single returning player suffers from similar issues to the main cast. With the knowledge that their society will do nothing to help them – or will actively work against them, even – the decision to enter into the extreme competition is a natural consequence of a society with sky-high medical fees, poor social care and a structure that emphasises hyper-competitiveness.

What Squid Game is trying to tell its audience, with its vicious competition and desperate, hopeful characters, is that poverty, crime, social disparity, are all the result of a poorly structured, hyper-capitalist society that leaves those who are unable to keep up in the dirt. It is not the result of weakness of character, or the innate immorality of humanity. The organisers of the game were not gifting the players a final chance to have a good life, they were taking advantage of desperate people who would give anything, and do anything, to save themselves and their families. This is largely a criticism directed at South Korea’s high-pressure social structure, but it undoubtedly has international relevance.

So yeah, Squid Game surprised me. I cared about its main characters, I was blown away by the treatment of its central theme, and although I wasn’t crazy about the ending, it delivered a well told story that resonated with me far more than any others of its genre. 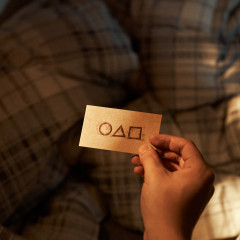 Brutal in both content and message, Squid Game seemingly came out of nowhere to (rightfully) take its place as one of the most talked about shows on Netflix.