Time for a throwback and a half. If you've ever been bored in school, the office, or life in general, chances are you've turned to one of these random browser games for some relief.

We've all been hit with the procrastination bug from time to time. When our attention is drifting, our motivation is plummeting, and the word document just isn't grabbing our attention anymore, we'll often find ourselves looking up random time-wasting games and ignoring our responsibilities. These games are truly iconic and after the tragic demise of Adobe Flash Player, it feels fitting for the sake of posterity to take a retrospective look at these random browser games.

One of the few random browser games to make the jump to mobile and can even be found on the app store, Bloons Tower Defense is a solid contender for the most influential random browser game of all time. Seriously, the number of clones this game inspired is staggering. Technically speaking it wasn't the first of its kind, but it was certainly the one that popularised the genre, and that's for good reason. Tactics, resource management, real-time strategy, all of these are core parts of Bloons Tower Defense, and each one engages your brain enough to make it feel like you're not just wasting time.

Specialist monkeys trying to stop balloons from invading their home – it's a wacky premise, but also an extremely fun one.

The latest instalment can be played here!

Not to be confused with the critically acclaimed kids' film Sharkboy and Lavagirl (which is something I do every time I try and describe this game to somebody), Fireboy and Watergirl is a two-player puzzle game in which one player takes the role of a boy made of fire, and the other controls a girl made of water. You and your partner will have to help each other to escape a series of rooms in various themed temples, and collect some diamonds along the way. Some deceptively tricky platforming and surprisingly well-developed mechanics make Fireboy and Watergirl an addictive escape from boredom. It spawned a number of sequels, each one expanding the game's mechanics in an interesting way.

Grab a friend and play it here!

Slither.io is one of many .io games that sprung up around the mid 2010s, but is easily my personal favourite. It's a multiplayer game, with people from around the world controlling a tiny snake, trying to encircle other snakes in order to kill them and absorb the little light orbs around them to grow bigger. Something unintentionally awesome about this game is the way the map works relative to your size. The bigger you are, the more you can see. This means that when you're tiny, there could be a massive opponent stalking you and won't be able to see them until you're right next to it. It feels almost like its own ecosystem, with smaller snakes fighting over the scraps left by larger ones. It can be extremely intense, especially when you get into a one-on-one fight. The bigger you are, the more you'll be targeted, so there's no time to relax. Heavy is the head that wears the crown.

Take a shot at the throne here!

The best example of the genre I like to refer to as 'spend money, get farther', Learn to Fly is about a penguin trying to, you guessed it, learn to fly. It does so by sliding off of an iceberg, soaring through the air, and falling flat on its face whilst you try and wiggle him around to keep him aerodynamic. The distance you achieve is measured, and you get money for how far you go. You can then spend that money on accessories for your penguin, ranging from a hang-glider to a jet-pack. It's pretty inspiring seeing the little guy get farther and farther, blasting past obstacles that once seemed insurmountable. A notable knock-off of Learn to Fly is Earn to Die, which has the same premise but with a storyline based around a survivor of a zombie apocalypse trying to drive to safety. Earn to Die is also a blast, but the original wins off of nostalgia points.

See how far you can get by playing Learn to Fly here!

Q. Can a matchbox?

Q. How many holes in a polo?

These are just some of the seemingly nonsensical questions posed by The Impossible Quiz, and their equally bizarre answers. But despite appearances, there is logic to them. The game promises that whilst many of the questions won't make sense to you, they will make sense to somebody, somewhere out there. And that is very true. Speaking as someone who has attempted the quiz many times over the years, more and more of the questions have started making sense to me. Maybe there's a certain philosophy to that. Is the quiz becoming more sensible, or am I just slipping slowly into madness, to the extent that the quiz's own brand of insanity is, from my perspective, the only true form of sanity? After all, when you gaze into the quiz, the quiz gazes back. Anyway, it's a pretty fun game.

And you can try it here. 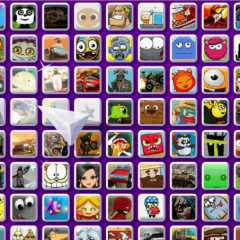 Time for a throwback and a half. If you've ever been bored in school, the office, or life in general, chances are you've turned to one of these random browser games for some relief.