Hysteria: A Post-Apocalyptic Cabaret is an event showcasing talent from Aberdeen queer feminist collective Hysteria as they try to imagine a better future. It feels interesting, and reassuring, after a talk concerning the future of queer spaces (Coming Out, Going Out by Jeremy Atherton Lin, reviewed here), and not necessarily feeling hopeful for them, to walk into what is essentially a queer space, or at least one transplanted from elsewhere for the night. In a way you could wonder if that is the way many queer spaces function these days. Transplanted events and monthly meetings and small gatherings of close friends, and less of the monuments across a city that Atherton Lin referenced. This isn’t necessarily a negative, or if it is, then Hysteria succeeds in making it not feel like one.

The event opens with Glasgow-based poet Sarah Grant, stepping in as host after the original hosts had to cancel due to self-isolating. She does a wonderful job of it too, bubbly and approachable seeming, instantly getting the crowd laughing and on side. She recites a poem of hers, about “that aunt…”, the kind of legendary closely- or semi-related eccentric older woman that we all seem to have in our lives. The poem is as charmingly scuzzy as the woman it describes, vivid and hilarious and so so familiar.

The next performer is Molly McLachlan, whose spoken-word/burlesque blend is haunting and just sad ‘n’ sleazy enough. The pieces she performs are a rally for slut-acceptance and hell why not, slut-celebration. There is a raw honesty and intensity to the way she performs, that verges on vulnerability and is incredibly endearing. She’s all the more charming the few times she makes a mistake, laughing at her slip up and unintentionally (I assume) driving her point further home – so-called “imperfect” women are just that bit lovelier.

Next to the stage is singer-songwriter Séimí, who opens with an interestingly melancholic cover of Bob Dylan’s The Times They Are A-Changing. Unfortunately, the rest of their set is not quite my bag. They perform well and have a beautiful voice, but their self-written protest songs are just a tad too trite and twee for my taste. However, the rest of the audience seemed thoroughly charmed by them and were even eager to join in some crowd participation, singing together in a call and response chorus. Overall, a very sweet and uplifting set, but perhaps not one for bitter cynics such as myself.

Sofia Siren is next to perform and is one of the highlights of the night. Her poetry concerns slut-celebration, like McLachlan’s work, and is touching and almost surreal, the line “I want bathtubs full of sluts” is particularly wonderful, and pertinent (I too want bathtubs full of sluts). Her work and her delivery are almost hypnotic, slowly pacing across the stage and reciting pieces that are lush and abstract, referencing things that feel known and unknown all at once.

When next act Jamie McCormick takes to the stage in a mini kilt, choker, knee high boots, and a leather cat mask à la Michelle Pfeiffer’s Catwoman, acoustic folk might not be the sound you would next expect to hear. But that is what McCormick deals in – and deals in well. Their songs are beautiful and feel nostalgia-tinged, in genre and subject. His second song of the set, concerning his coming out, comes across like Sandy Denny by way of Wicked Little Town, and must have left a few eyes un-dry.

The final act of the night is host Sarah Grant who performs another entertaining poem about an eccentric woman in her family, this time her gran, and her connection with Glasgow. She expresses that she is aiming to be one of these strong and somewhat mad women that her life has been full of, and honestly, it seems like she’s well on her way. She follows with a story about the last witch burned in Scotland, Janet Horne, that is chilling as well as captivating. However, when she performs another poem, an ode to Hermione Granger, it feels a little off colour in a queer setting, despite her yelled dismissal of transphobes. She thankfully manages to pull the event around once more with her charm and wit and the cabaret leaves me decidedly with a smile on my face rather than a bad taste in my mouth.

More information can be found about Hysteria here. 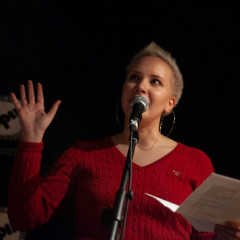