Produced and performed by graduates of the University of Worcester’s MTheatre course, Sandhill Manor utilises the folktale of the Sandman to weave its own narrative dreamscape.

Inspired by the folklore figure of the Sandman (who puts people to sleep by sprinkling magical sand in their eyes), Sandhill Manor features a ragtag group of characters who are ‘haunted by strange happenings’, and is performed and created by graduates of the University of Worcester’s MTheatre course.

The production takes viewers through the life experiences of the various characters, depicting their pasts through different types of animation, such as hand-drawn animation, stop-motion animation and animation calligraphy, while also demonstrating the numerous ways in which they are haunted. For example, Alice, a painter, is placed back inside her room by an external figure every time she attempts to leave the manor.

Scenes following individuals are mixed with wider shots that show all the characters in their own rooms as they move in synchronisation with each other and non-diegetic music. The music throughout the production is intertwined with the narrative and scenes, and for the most part, works quite well in this capacity.

Of note as well, is the absence of any dialogue throughout Sandhill Manor, save for a few lines during an early scene that felt oddly out of place. The choice to stage the production in this way is admittedly somewhat admirable, as the cast convey the emotions of their characters solely through their actions and physical performances. However, the choice to omit dialogue also feels like a shortcoming of the production, as I was left trying to piece the narrative together from what was shown on screen, and consequently felt confused during my viewing.

The piece utilises a mixture of animation with live-action, while also using puppet-like figures and smaller props to convey the movement of characters between scenes or settings, with this being done by an external presence clad in black. The animations themselves are well-done, though sometimes difficult to follow, and are produced by members of the cast, with one stop-motion animation using cut-up newspaper clippings to represent an accident. The choreographed musical interludes where the characters move in tandem with each other are also effective, uniting them in being confined to the manor.

In contrast to the wider shots in Sandhill Manor where the camera is static, shots that follow the cast in moving around a scene or set result in a frantic sense of movement. Though this presumably echoes the feelings of the characters, it felt awkward, and at times clumsy, as the frame constantly shifts while the camera is in motion.

Despite a commendable effort by those involved in the production, Sandhill Manor felt contrived, especially without any dialogue, and misses the mark at this year’s Brighton Fringe. 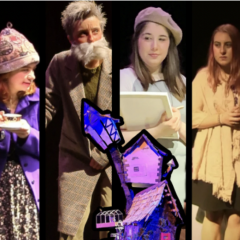 Produced and performed by graduates of the University of Worcester’s MTheatre course, Sandhill Manor utilises the folktale of the Sandman to weave its own narrative dreamscape.