'Tiny Desk Concerts' are a series of concerts published on YouTube by the National Public Radio, where they invite various artists to their office in America to perform a concert. Hozier is an Irish singer-songwriter, and musician. This concert was published in 2014, the year after his first #1 hit 'Take Me To Church' was released.

Hozier's 'Tiny Desk Concert' was a short concert and had an informal and intimate feel to it, as most Tiny Desk Concerts tend to. Lasting only 15 minutes, Hozier performed three of his songs; 'Take Me To Church', 'To Be Alone', and 'Cherry Wine'. In 'Take Me To Church', he was accompanied by three instrumentalists, but the latter two were performed solo with him playing the guitar. I think the NPR Office suited Hozier's set very well as the intimate setting reflected Hozier's demeanor while performing.

The first thing that struck me about the concert was the informality of it all. I thought that the level of formality was very suitable for the concert due to its length and it being published on YouTube. Both it's informality and length will make it more appealing to people browsing the platform when they have a bit of free time, and to people like students who have shot breaks during the day. The video starts with Hozier performing 'Take Me To Church' right off the bat, which engages the viewers and makes sure they wont click off the video. However, after finishing his first song, he briefly introduces the second and goes straight into playing it. I think one way the concert could have been improved is by having Hozier introduce himself after his first song, so that new viewers who may not know him gain a little bit of knowledge of who he is as an artist.

Hozier is known for his soulful and moving voice, and his 'Tiny Desk Concert' displayed that very clearly. From the heavy and powerful lines of 'Take Me To Church', to the softer, sweeter lines in 'Cherry Wine', Hozier's range of emotion in singing is displayed throughout the video. Even without all of the vocal effects that are applied in studio versions of the song, Hozier's voice shines through. The live versions of the songs sound reasonably different to the studio version due to different arrangements being used, and I think this worked quite well in 'To Be Alone'. The live rendition left out the drums that are in the studio version, leaving it at guitar and voice. I think this gave the song a 'raw' feeling and provided a new level of intimacy which correlated really well with the message of the song.

Another thing I liked about Hozier's performance was the songs he chose to perform. There is a lot of what I like to call 'casual social commentary' in Hozier's songs and this is seen in 'To Be Alone'. One of the first liens references the fact he is uncomfortable with modern pop music and its 'anthems of rape culture'. I believe that a lot of popular songs , whether intentionally or unintentionally, encourage negative behavior or harassments. It is good to see artists combating the messages these songs encourage by exposing them.

It was not just the social commentary that I liked about Hozier's lyrics, it is their versatility, The lyrics in the songs that he performed were very poetical. His music is type of music you can either listen to carefree or analyse for hours, depending on your mood.

SUMMARY - My impression of the concert was overly positive. I think the phrase 'short, but sweet' is a very good way to encapsulate my opinions on it. If Hozier was to do another 'Tiny Desk Concert' to show of some of his newer music, I would absolutely love to see it! I most definitely recommend the concert to anyone who has a few spare minutes throughout their day, as I'm sure it will brighten it. 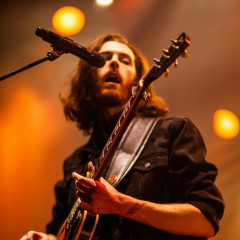