Bursting with comedy, lust, tragedy and so much more. Impromptu Shakespeare combines the world of Shakespearian humour with modern-day culture to craft a unique show every night that left an audience howling.

A well-crafted improvised play is something created with great talent, a rarity, and the Impromptu Shakespeare cast hit the mark. Upon entry, the audience are handed ping pong balls littered with Shakespearian motifs and language. Soon after being seated in the Oil Shed, the audience were in invited to toss them to the stage- into a cast members shorts! From that moment on- the audience was full of enraptured faces and smiles that did not fault through out. After the four balls of stimuli were chosen- the ensemble threw themselves into a world of lust, tribulations and Italian sake! By having different inspiration words every night, this show is different every performance- and I would see it every night if I could.

The actors immense acknowledge for the world of improv and Shakespearian criteria must be applauded. At times I felt as though I could be watching a true Jacobean play, or a rehearsed comedy set. These actors went above and beyond the “yes and” rule of improv, embracing anything that was thrown at them- whether that be from the surrounding noises (in my case an ambulance), technical difficulties or even a fellow cast member throwing them under the bus! It was such a joyful experience to be able to witness the ensembles lightbulb moments when they formed a brilliant idea, or when they were able to laugh at each other just as the audience were.

This play featured all types of comedy- from slapstick, to sarcastic remarks- making it incredible accessible to anyone looking to laugh. With reoccurring themes and motifs throughout, the audience was brought together and I was a witness to a full auditorium of beaming smiles- something infrequent in the current climate. I also must applaud the lighting team who worked with different scenarios on the spot, enhancing the brilliance of this show.

You may be thinking that Shakespeare and improvisation don’t sound like a steady combination- but I urge to watch it yourself and find out how wrong you are. It is a must see of Brighton Fringe, or even on their tour of the country! Watch Impromptu Shakespeare at Brighton Fringe on July 11th and on tour across the UK. 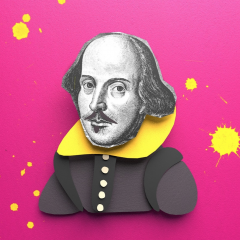 Bursting with comedy, lust, tragedy and so much more. Impromptu Shakespeare combines the world of Shakespearian humour with modern-day culture to craft a unique show every night that left an audience howling.